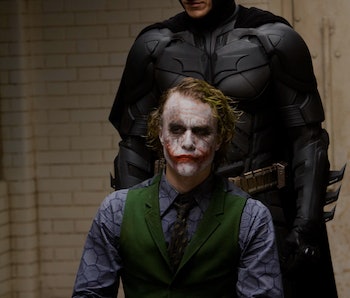 As the United States continues to feel the weird grip of a very real creepy clown epidemic, one New York City police department has decided to enlist Batman, America’s best anti-clown hero, for a special task force to combat their weird problem.

(Horrible) people dressed up as scary clowns began scaring innocent bystanders this summer, and reported cases of creepy clowns popped up in South Dakota, New Jersey, New York, and more. Nobody really knows where these clowns are coming from, or what their collective goal is, or whether or not all these cases are legitimate, but the clowns have become prominent enough that many consider them a threat to public safety.

The Fairport Police have responded to their own local reports of creepy clowns with a little costumed mischief of their own. The department posted their Batman announcement on Facebook over Halloween weekend.

The post claims that police have confirmed their clowns to be working for the Joker, and as such they’ve deputized an extremely normal-looking Batman with a police uniform, so that he can lawfully apprehend the clowns terrorizing Fairpoint. The department wrote on their Facebook wall:

“The Fairport Police have received a lead in the Crazy Clown epidemic that has been gripping the nation. We have received information that these clowns are the henchmen of … you guessed it … the Joker.

Since verifying this new information, the Fairport Police Department have recruited the assistance of America’s Favorite Caped Crusader, BATMAN!”

The whole situation would be funny if the clowns weren’t legitimately causing headaches for local police departments across the country. The problem even spread oversees when photos emerged of a creepy clown in Whitehaven, England was chased down by a local man wearing a Batman costume.

The whole clown situation sounds absurd, but as we’ve read throughout the year, clowns are a genuine, psychological fascination, and the fact that people are using this fact to terrorize local neighborhoods is, frankly, upsetting.

Likewise, there are some issues with Fairpoint’s Batman announcement: Batman is effective precisely because he works outside the law, and he’s always had a complex relationship with cops. There are myriad problems with Batman is now working within the police department to stop crime; if Batman were real, he probably wouldn’t be psyched about a cop taking his name.

Still, since vigilantism is dangerous (and illegal), it’s good to see Fairpoint take point on their clown problem and work with a known vigilante to make sure Halloween weekend stays safe for everyone.