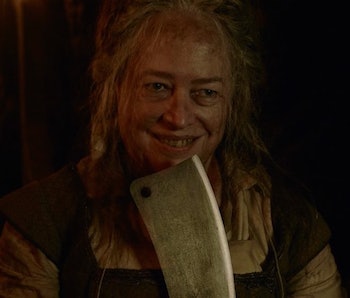 American Horror Story’s sixth season, Roanoke continued on Wednesday night and was determined not to let The Walking Dead have all the head-smashing fun.

Sure, The Walking Dead might’ve been much, much more hyped up, and the deaths of Abraham and Glenn at the hands of Negan and his infamous baseball bat were much gorier, but American Horror Story gets points for being unexpected — at least so far as AHS goes.

While the actors aren’t just slowly realizing that the people they were portraying weren’t kidding about the creepy stuff, the real interview subjects are learning things about each other. Specifically, that Matt is in love with Lady Gaga’s Scáthach, the original Supreme witch.

At first, when Dominic brings Shelby down to the basement to see what her ex is up to, she jumps to save his life, thinking he’s being attacked. However, when Matt says that he came back to be with Scáthach, Shelby turns her crowbar on him. Several times. By the time she’s done with him, Matt’s head looks just like Glenn’s did on The Walking Dead, which is to say it looked like extra bloody ground beef.

Look, did the American Horror Story writers know that The Walking Dead was going to kill a character by bludgeoning them to death? Yes, because AMC couldn’t have teased it any more than they already did. It’s probably not a rip off, though. Maybe smashed skulls are just this season’s other trend in horror … alongside creepy teeth.