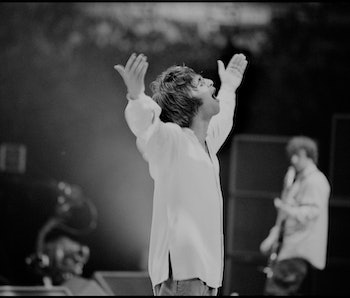 In the times in which we live, it would be unrepeatable,” singer-songwriter Noel Gallagher says, reflecting on the chaotic reign of his swaggering ‘90s Britpop band Oasis. Even if you were “mad for” Oasis in the ‘90s, revisiting their antics — which are outlined in the new documentary Supersonic — leaves one absolutely baffled that they were able to get away with it at all.

Chuck Klosterman once wrote that Oasis was “overrated on purpose,” which certainly explains how it was hard for many in America to take the band seriously. But that theory doesn’t explain the continued fascination. As Supersonic director Mat Whitecross told Inverse, Oasis existed at a time when — in the UK anyway — music meant something different than it does now. It defined a type of culture which has literally vanished, leaving in its wake a nostalgia for a time when manic, bad boy rock still ruled the world.

“Part of it is technological,” Whitecross said. “[Music] has now become a product. It’s become a lifestyle thing. But it was life and death when we were growing up. Kids today might still feel like music is everything, but they’re probably less tribal. They listen to songs and not artists. Certainly songs rather than albums. In the old days if you were into this band, that was it.” Does this mean Oasis were authentic? “They weren’t doing it for the cameras.” Whitecross said. “It was real.”

The “real” part Whitecross refers to is the infamous tendency the band had for internal turmoil, which mostly manifested in fights between songwriter Noel Gallagher and his younger brother, lead singer Liam Gallagher. It seems implausible that contemporary 2016 audiences — UK or otherwise — would put up with the level of unprofessionalism offered by the Gallagher brothers at their worst. Kanye West’s outbursts are probably the closest thing pop music has in the 21st century to Oasis, and even his tirades seem planned.

The most enjoyable aspects of the documentary aren’t when the two Gallagher brothers team up and succeed, but instead, when they suffer epic burnouts. During the first Oasis tour of the United States in 1994, the band played the Los Angeles venue Whiskey a Go Go and flamed out hard. Footage of the gig shown in the doc preserves the hilarious disaster for posterity. “This was a make or break moment,” Whitecross said, “and they broke it.”

Because the entirety of the band had been snorting crystal meth before the show, the disorganization is laughable. In the footage, Liam Gallagher forgets lyrics, the band begins playing the same song they just finished, and everyone generally walks around the stage as though they are drunk at backyard party, not professional performers. Noel even mentions his setlist was “different” from other members of the band, meaning bizarre mashups of multiple Oasis songs were being played at the same time. This is either the worst gig the band ever had, or the best, depending on your perspective. Worst, because they failed as musicians. But, also the best, because historically, it’s a microcosm of all their problems. Two different setlists? Different songs being played at the same time? The sibling rivalry that defined Oasis needs no better synecdoches.

Nirvana was the rock band that defined music in the ‘90s in the United States, and Oasis was just as big, if not bigger, in the United Kingdom. And the reason why Oasis never fully “broke” America might actually have something to do with why they were so unique.

Throughout Supersonic, you get the notion that though younger brother Liam Gallagher said and did outrageous shit (trashing hotel rooms, mouthing off to journalists), he wasn’t faking it or affecting his behavior. Liam really was an out-of-control crazy person and his older brother Noel really was trying to keep it all together. Watching Noel and Liam fight on camera in archived footage is nothing new, but it offers new insight: Noel was trying to maintain some level of decorum, and Liam was trying to have a party. Who was right? Which attitude is more “rock ‘n’ roll?”

“Noel definitely did the more grown-up stuff,” Whitecross said. “He ran it more like a business. For better or for worse.”

Aesthetically, one of the strengths of Supersonic is that at no point do we see a contemporary version of Noel or Liam, or anyone as a visual talking head. Instead, all the new interviews are audio-only, creating a sharp contrast between this and other rock documentaries. “Noel said: ‘I don’t want this to be an exercise in nostalgia,’” Whitecross said. “He didn’t want to have grey-haired rockers reminiscing about the good old days. He found that off-putting.”

The technique works, too. The lack of talking heads creates a kind of time travel effect in which Supersonic lets us exist in the chaos as though it were still the early ‘90s. Here, we get to experience two extreme points of view very briefly. Noel and Liam aren’t dishonest about their speedy rise to the top, which in a way, serves as a kind of counter-mythology to the idea that they are both “arrogant.” In reference to a brutal firing of the band’s first drummer, Tony McCarroll, Noel admits that “Whatever [McCarroll] says about me is probably the truth.” It’s not exactly humble nor is this an apology, but this sort of honesty feels rare.

The two very different philosophies of Noel and Liam briefly united to create amazing success, albeit unsustainable success. Mercifully, the film never shows us the eventual Oasis breakup in 2009, and that’s probably for the best. Both Gallagher boys left the band more times than George Lucas has reworked the original Star Wars films, meaning a documentary about the whole story of Oasis would probably be tedious for a casual viewer and utterly traumatic for a hardcore fan.

Supersonic shows Noel and Liam Gallagher being their true selves of two decades ago. The ‘90s time travel effect works so well, in fact, that at several points in the documentary, you’re afraid Liam is going to step off from the screen and punch you right there in your seat.

More like this
Entertainment
6.30.2022 5:01 PM
Everything we know about Dune: Part Two
By Gabrielle Bondi and Ryan Britt
Entertainment
2 hours ago
Next Exit is the existential road trip sci-fi fans need — here's why
By Eric Francisco
Entertainment
6.29.2022 11:00 AM
Marvel leak reveals a groundbreaking new god in Black Panther 2
By Dais Johnston
Related Tags
Share: