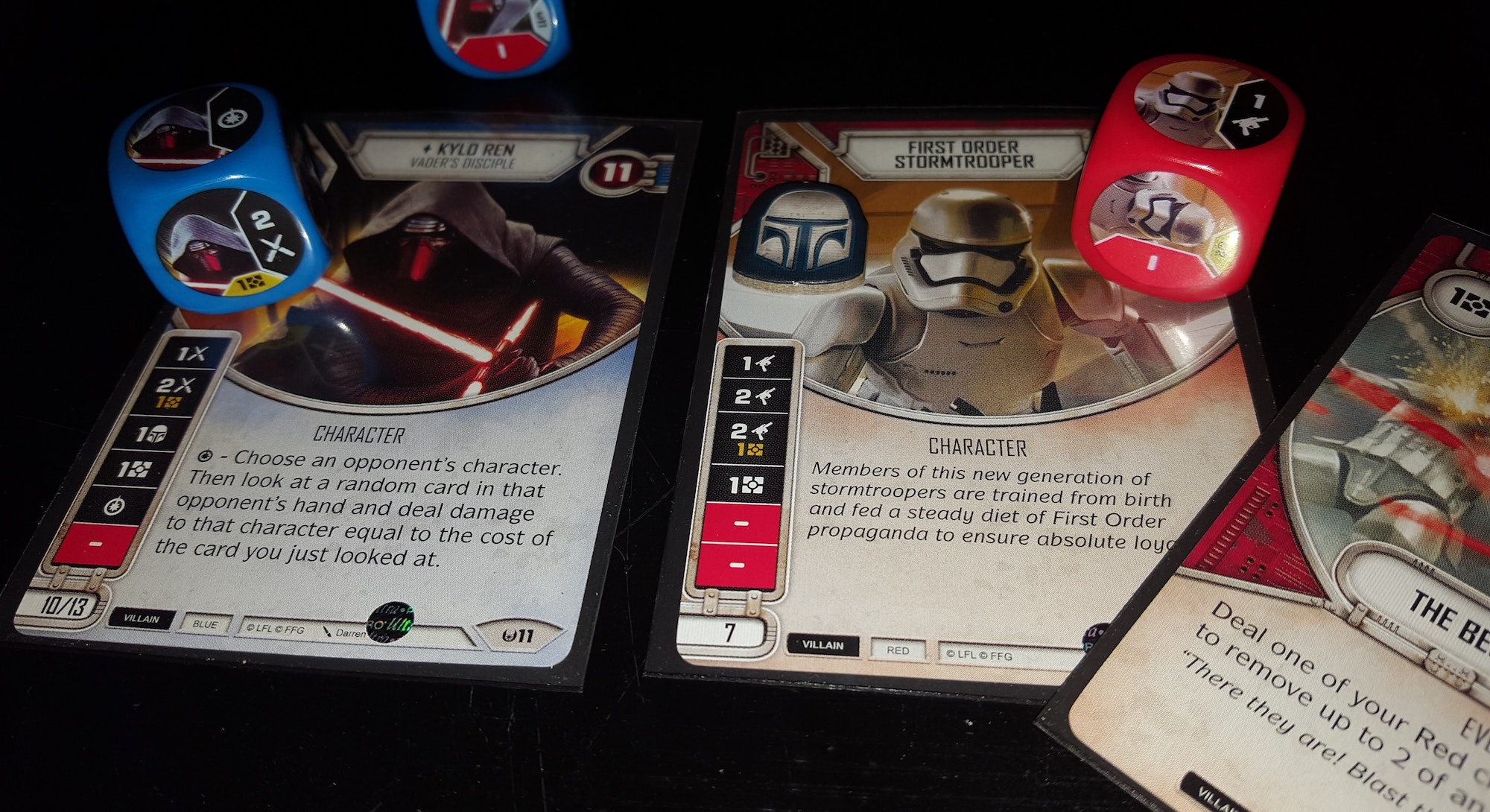 Let’s say you were to cross-breed a collectible card game with a dice game. And say this tabletop romance went down in the monster pits beneath the palace of Star Wars’s escargot-like ganglord Jabba the Hutt. To thrive among those dominant and established brutes — the lumbering Rancors and the unnamed, many-tentacled things — whatever emerged would have to be a fleet and nimble fighter. If it were intelligent, too, well, that would just be a bonus.

Nimble is certainly what game publisher Fantasy Flight strove for with Star Wars: Destiny, the newest offering from its long line of generally excellent Star Wars games. If you’re looking for a quick fighter based in everyone’s favorite distant galaxy, this card and dice hybrid is happy to claw its way into your heart.

It’s a speedy duel to the death for two players. To begin a game of Destiny, you customize a deck of 30 cards, select a few characters, and prepare to roll dice by the chunky fistful. Actions shuttle from player to player like a tennis ball, until somebody’s Force is wasted. After you get the hang of it — and the basics were an easy grasp even for a few non-gamers — games take no more than 30 minutes.

(One of the few sticking points in the rules was what it means to “control” versus “claim” a type of card called battlefield. Once you realize that a battlefield which begins the game under your control can still be claimed, everything starts to fall in place. It’s actually less confusing than the rules or I make it sound.)

Destiny’s inaugural 174-card roster includes the movie icons you would expect — famous heroes, scum, and villians — plus a few faceless troopers and bit players like Captain Phasma or Jango Fett, on paper, at least. It’s a collectible game, so if you just have to have Darth Vader, be prepared to pay for him in trades, singles purchased, or boosters cracked.

The first set is subtitled “Awakenings.” In keeping with this theme, Rey and Kylo Ren are the faces of the introductory decks. Even within the limited sample of the starter sets, which are 20-card decks rather than the full 30, it’s apparent that Destiny is not afraid to soak its cards in whatever pulp Fantasy Flight can wring from the Star Wars Universe.

Kylo Ren, for instance, has a special ability that lets you to point to a card at random from your opponent’s hand, and then deal damage equal to the chosen card’s resource cost to an enemy character. As those costs may range anywhere from zero to five, Kylo can hit hard, or not at all. Such swinginess feels appropriate for a character who is charitably described as “chaotic” or by Twitter wags as “emo.”

It’s not only characters: weapon upgrades soak up some of that sweet Lucas juice, too. Spending the special side of the Infantry Grenades die causes you to discard the upgrade while dealing two damage apiece to the entire roster on the other side of the table. Never before has a slice of cardboard combined with a die so evoked pulling a pin and lobbing an explosive.

In the way that George Lucas remixed Word War II dogfights into a Death Star trench run and samurai battles into lightsaber duels, Destiny too borrows from what came before while also adding a shiny new coat.

That fresh coat is the dice. Broadly speaking, your deck exists to modify dice or add more to your pool. These six-sided chance cubes provide the main source of damage, which you will use to win by dealing lethal amounts to the opposing player’s characters. A roll of the dice for the Gaffi Stick weapon, for instance, offers one-in-six odds of thwacking an opponent for two damage.

Certain rolls of the dice fuel special actions, or churn out cardboard chits called resources. Resources are spent to play cards from your deck, which are one-time bonuses called events, character upgrades like weapons, or support cards that may bring even more dice to the table, like TIE fighters and droids.

By the same token, Destiny avoids the trap of doing something for the sake of being different. Dice are integrated deep into the game’s DNA. That enables Destiny to pull off stunts other card games cannot. Consider that all of the starter dice have at least one blank side.

“We wanted to evoke a moment of tension when rolling the dice, and give a player’s opponents a result to root for,” Destiny game designer Lukas Litzsinger said in an email to Inverse. (As a corollary, blanks incentivize players to take an action that exchanges discarding a card for a reroll, in turn thinning the deck to accelerate the game.)

As for the cards, here the game is smartly aware of its precursors. And yet the card effects, at least of those in the starters, seem downsized. It’s not necessarily a flaw; it just means the stakes of the game are closer to a high-noon showdown rather than an epic clash of armies.

For example, take the card in Kylo Ren’s starter set called “Disturbance in the Force.” It has but three functional words — “Reroll all dice.” That’s an exciting phrase to see on one of Destiny’s cards, but it’s not as powerful as, say, the Magic: The Gathering analogue.

Magic, when it effectively created the collectible card genre 23 years ago, demonstrated how the word “all” could be so potent. A professional Magic player was once asked what he thought made the world’s most popular fantasy collectible card game so great. He pointed to a particular class of cards called, in the fungal jargon that has overgrown the game, “board sweepers” or “wraths.” Cards like “Wrath of God” all riff on three words, too: “Destroy all creatures.”

The pro pointed out that wraths wipe the game state clean. It was actually a very clever thing to have in a game two decades ago. The ability to perform a soft reset, mid-battle, empowers a diversity of approaches; it curbs the strength of very aggressive decks without completely kneecapping anyone. After all, wraths judge both sides of the table equally.

Destiny’s Disturbance in the Force can be used like a wrath, to upend an opponent’s incredibly lucky roll while shifting around your side of the table. But because the game’s dice are more fluid than Magic’s creatures, manipulating them in such a way does not feel as though the tide of war has totally changed.

And that is where Destiny is in an odd place. To its credit, no single card ever felt too overwhelming. To shine, all of the cards required the correct context. That means you have to be holding the right cards for the proper moment.

One suggestion I can offer, even early into my time with Destiny, is that you really need to hang on to defensive cards like Block and Dodge until late in the game. (These remove opponent’s dice showing damage signs en masse. There will be more of the en masse to remove as the game progresses.)

Perhaps, buried in the depths of a booster pack, there are great and terrible cards. I don’t know. (Such is the way of collectible games.) But in the starter sets, the relative lack of powerful cards leads to scenarios in which your deck simply cannot save you.

This also means that there will, sometimes, be amazing rolls that make the game feel as though it’s playing itself. There was one instance in which, just two turns into a game, my dice spat out eight melee damage. (For context, the health of a First Order stormtrooper is seven. I killed half of my opponent’s characters within five minutes.) The odds of this happening were low — in only one out of every 216 activations will Rey, equipped with a lightsaber, produce eight damage. But in that moment, I did not feel particularly skillful, just sort of dumbly overpowered.

Likewise, I suspect that many games, at least for players learning with the starter sets, will end in concessions. In each of the games of Destiny I’ve played, I cannot recall one that ended in which the conclusion was not obvious to both parties. That is not true for something like Hearthstone or Magic, when a sudden or sneaky card combo can immediately shut down the game in unexpected ways.

Because players alternate actions, and rolling versus using dice are two separate actions, you will have a final action to deal with lethal amounts of damage dice. It is not inevitable; if you’re holding the right card, or can spend the right dice, it is the joy of successfully gnawing out of a bear trap.

There are more than a few things I cannot yet tell you about the game. I have been slowly learning what is luck of the draw or luck of the roll versus a smart play. It is easy to learn Destinys basics — the game plays itself as much as you let it, if you take actions uncritically — but figuring out what is an intelligent action is not always obvious. (Maybe it’s me, but it took an hour to realize how important it is to time exactly when to claim the battlefield cards. In final rounds, it can give you the decisive advantage of rolling your dice first.)

I cannot tell you what the competitive scene will look like. There is no official word regarding other types of competitive formats, such as drafting, beyond constructed 30-card decks. Nor can I tell you if making the game collectible was a healthy move.

For publisher Fantasy Flight, it marks the first foray into the collectible card genre in nearly a decade. In the company’s own words, collectible card games have “dynamic, expanding, and constantly evolving game play” but also a “blind-buy purchase model that has burned out so many players.” To Destiny’s credit, its booster packs are cheaper than most, and you will need half of Magic’s 60 cards to round out a Destiny deck.

What I can tell you is that the dice are lovely, the half-hour goes by at lightspeed, and when Kylo Ren hits for four damage with his special attack, man does that feel sweet.

The card and dice game Star Wars: Destiny will launch with hobby store events on November 18 to 20. The release plan for booster cycles is thrice yearly, with new starter decks on an annual schedule.