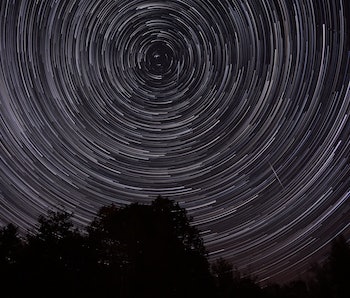 No matter which hemisphere you live in, you’ll be in for a treat if you look up tonight. The annual Orionids meteor shower is peaking right now, and this year it’s going to be pretty chill. If you can escape city lights, you can catch up to 20 meteors an hour. The Orionids are known for particularly bright and fast meteors that leave a lingering trail, so there’s a really good chance you’ll see a good show.

The peak of the meteor shower was actually right before dawn this morning, but if you weren’t willing to crawl out of bed in the wee hours of the morning, you can still catch a good show tonight into tomorrow morning. Look toward the southeast to see the radiant point of the meteors. They’ll appear to be originating near the constellation Orion (hence the name “Orionids”).

This year is relatively mild at about 10 to 20 meteors per hour. Some years have as many as 75 meteors in an hour, while other meteor showers, like the Perseids in August or the Geminids in December, can have hundreds in an hour.

The material burning up in the Earth’s atmosphere is debris left behind by Comet Halley. We last saw the comet from Earth back in 1986, and won’t see it again until 2061, but our planet still intersects its orbit twice each year. The Eta Aquarids meteor shower in May is also caused by Comet Halley’s debris.

If you want to catch the Orionids, you’ll need to get as far from light pollution as possible. The waning moon is already putting out enough light to make seeing the meteors hard, so getting as far from city lights as you can is key. You can use a map like Dark Site Finder to find the least light-polluted spot near you. If you can’t quite get away from light completely, you can still find a spot in a darker city park. The brighter Orionids will cut through the light pollution better than most meteor showers, so grab a blanket and settle in for a chill light show.

More like this
Science
6.29.2022 7:45 PM
Webb Telescope will take aim at one of Hubble's most iconic targets
By Georgina Torbet
Science
9 hours ago
These 5 objects could be Webb's full-color first images
By Kiona Smith
Science
10 hours ago
This "city killer" asteroid won't hit Earth after all
By Andrew Moseman
Related Tags
Share: