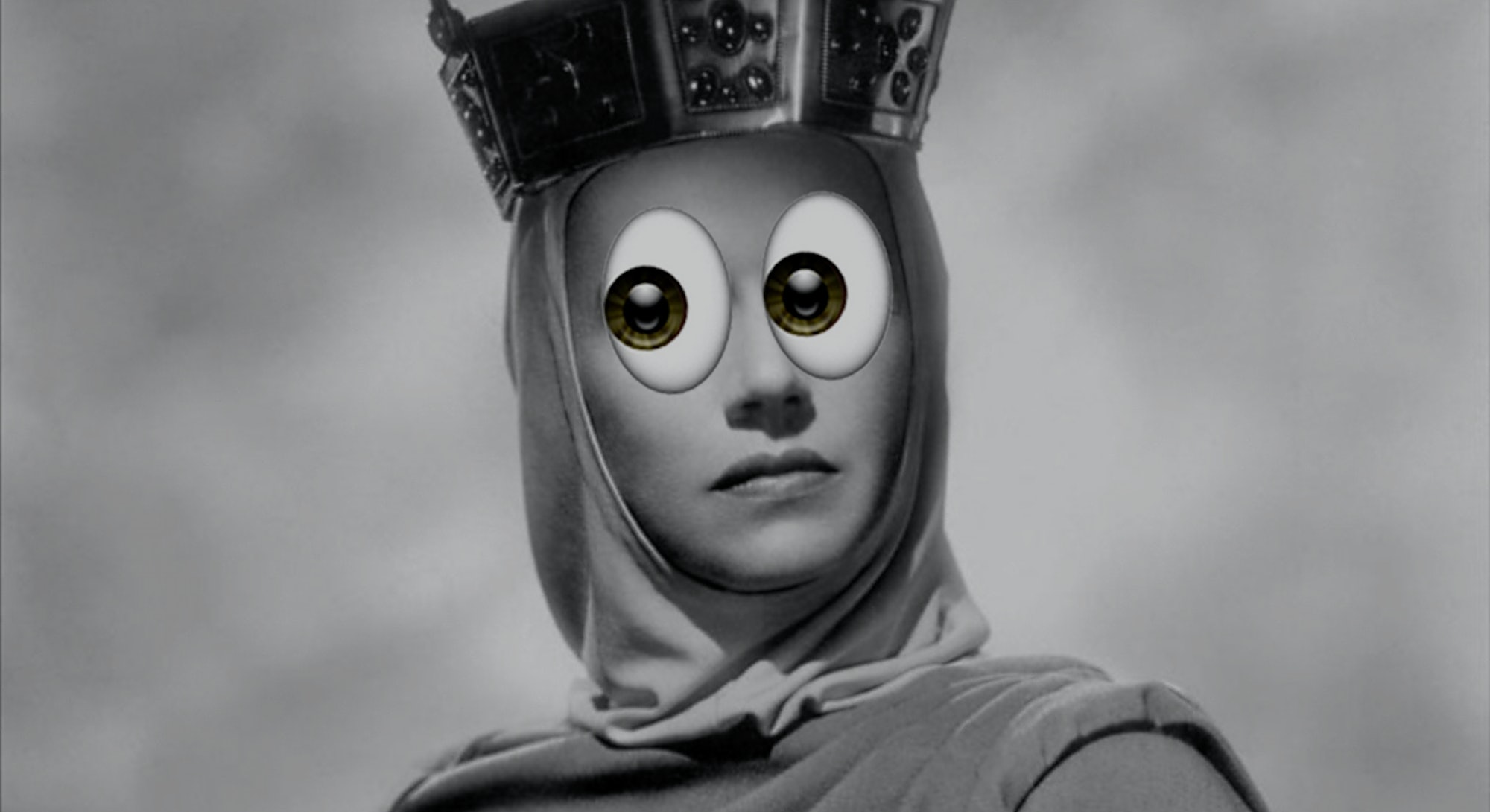 Most emojis simply replace common words or bring a little bit of flare to a text conversation. A rose is a 🌹 is a rose. A pizza is a 🍕 is a pizza. However, some emojis have transcended English, serving as pictographs of ideas that letters have yet to domesticate. The most notable of these — and almost certainly the most important — is the eyes emoji ( 👀 ), which has become a go-to way to describe unmannered, reflexive reactions to uncomfortable or provocative social situations. This is interesting not only because it suggests emoji dialogue can be truly intimate but also because emojis play on ambiguity in a way that implies an altered mental state.

Look at the eyes emoji long enough and you see crazy.

There are several uses for the eyes emoji. As Emojipedia points out, it’s sometimes used to indicate “pervy eyes” to signal approval of an attractive photo posted online or “shifty eyes” to convey a deceitful act. When it comes to the eyes emoji turning “pervy,” its less crass and more thirst. Think of it as the gut reaction when a hot person is walking down the street and passersby continue on their course while looking toward said hottie. As for the “shifty eyes,” it’s part nosy, part being obvious about the nosiness, tinged with a dash of judgment, and a smidgen of shadiness.

Sometimes it’s better to let the eyes do the speaking.

The eyes emoji’s elevated symbolism is nothing new. This sort of correspondence between an object and a feeling is common in literature and poetry. People in graduate programs and the tweedy sort of undergraduate workshop would be quick to identify these emotional nouns as “objective correlatives.” The term was popularized, so to speak, by T.S. Eliot in his 1919 essay “Hamlet and His Problems.”

In the piece of criticism, Eliot argued that William Shakespeare’s Hamlet faltered if the tragedy is scrutinized through the lens of the objective correlative. He felt that Shakespeare didn’t provoke readers to feel what Prince Hamlet did through the devices of symbols, actions, and characters. Instead, he simply used dialogue to describe the emotions. T.S. Eliot thought that sucked a little bit. If modern text messaging is any indication, his fringe argument doesn’t feel so fringe-y any more.

“If your friends says something strange or provocative, or even shocking, then that emoji is an emotive response that dramatizes the situation,” says Brad Greenburg, a professor in the College of Arts and Sciences at Northeastern Illinois University. If you just responded by saying ‘Don’t be such a dick,’ then the ambiguity would be diminished.”

That ambiguity is part of the magic about the eyes emoji. Theres a general emotion that’s expressed when somebody sees it in a tweet or text and the open-endedness allows for fascination. A symbol that has such a direct interpretation has a different effect than one that invokes a feeling.

Greenburg brings the eyes emoji back to another Shakespearean tragedy, Macbeth, and how Eliot argued that the piece depicted the objective correlative.

He gives the example of Lady Macbeth: Her madness, he says, is perfectly understandable, because it ‘has been communicated to you by a skillful accumulation of imagined sensory impressions.’ In other words, the objects of murder, the visible signs of the horrible deed, were there for us to see, he says. “The emoji, like Lady Macbeth’s ambiguous and unhinged dialogue during her madness, gives us something to think about. The symbol provokes interpretation, and perhaps reflection.”

Madness and chaos are better shown than told. When it’s difficult to express through words, actions and symbols are the superior ways to get an emotion across. And the ambiguity that’s often paired with effective portrayals of madness also works together with the eyes emoji as as form of emotional communication. The chance to reflect on meaning after coming across something like 👀 is what makes internet communication so remarkable.

Along with the eyes emoji, there are a few others that have also reached a level where they represent an emotion. The hair-flip emoji isnt an action that everybody typically does, but sheer confidence and DGAFness radiates from the emoji. Same with the painting-nails emoji, which exudes pettiness and glamour without the sender actually needing to break out the polish.

As certain emojis become tokens for feelings that are better described with symbols, it’s worthwhile to consider what the phenomenon says about human communication. Words, as shown with the eyes emoji, arent always the optimal way to invoke certain emotions. That says less about the shortcomings of human language and more about the power of emojis.