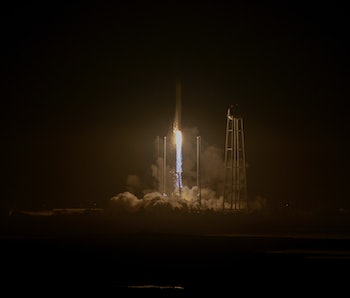 Orbital ATK’s Antares rocket launch on Monday night appeared damn near perfect to the outside observer, save for a brief five-minute delay before takeoff. Though any hint of trouble was worrisome, especially since the last rocket of this type exploded, officials explained in a press conference that it was just a final, extra-thorough precaution, and the rocket performed better than expected.

The launch took place at NASA’s Wallops Flight Facility in Virginia. The spacecraft is headed for the International Space Station, and it’s loaded with more than 5,100 pounds of supplies and research material.

The last time Antares attempted to launch two years ago, it didn’t go so well. After an errant sailboat delayed the launch by a day, the rocket exploded just seconds after blasting off, utterly destroying the spacecraft, and doing $15 million worth of damage to the launch pad.

A lengthy investigation concluded that the blame for the mishap lay with Antares’s main engines, and engineers swapped out the rocket’s old engines for new RD-181 engines. In a press conference following the launch, Frank Culbertson, President of Orbital ATK’s Space Systems Group, said they performed “even better than we had expected.”

The only brief bit of drama came when the launch conductor delayed the launch for five minutes. Culbertson explained that there wasn’t any particular problem, rather, since there was so much going on, they wanted an extra five minutes “to make sure that we didn’t miss anything in the checklist.”

“I think it was a great call on his part. The team reacted quickly, readjusted, and just kept on chuggin’,” he said.

The Cygnus spacecraft successfully deployed its solar arrays — which unfurl “like a Japanese fan” rather than in an accordion fashion like most arrays — by 9:26 p.m. EST. It will arrive at the station at about 6 a.m. on Sunday, October 23.

Now that the Antares rockets are working better than ever, Culbertson says Orbital ATK will continue to launch their “home vehicle” from Wallops, which he called their “home base.” During the press conference, he said they have six more launches left on their contract with NASA.