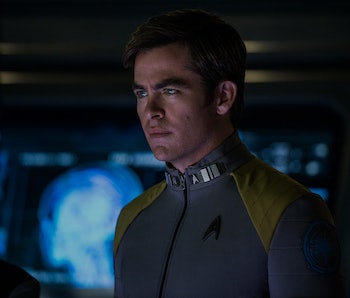 It’s almost unthinkable, but following the destruction of the USS Enterprise in Star Trek Beyond, Captain James T. Kirk will not immediately be in charge of the replacement Enterprise-A. Instead, Kirk will become the interim Captain of the USS Endeavour.

The first post-Beyond comic book — titled Star Trek: Boldly Go from IDW — will hit shelves on October 19. In it, both Kirk and Bones will temporarily be hanging out on ship called the Endeavour. The opening preview pages of the first issue of Boldly Go appeared on io9, and they clearly demonstrate that things for the crew of the late starship Enterprise aren’t shaking out quite as we expected. Bones has even taken a reduction in rank just so he can continue to serve with his bro, Captain Kirk. Meanwhile, the majority of Kirk’s new crew on the Endeavour have never served with him at all, save for the briefly glimpsed character — Navigator Darwin — who took over for Chekov way back in Star Trek Into Darkness.

An explanation as to why Kirk and company don’t immediately jump on the newly constructed Enterprise has yet to be revealed, though there are several possibilities. Maybe the new Enterprise isn’t ready at all, and that rapid construction we saw at the end of Beyond was a flash-forward in the distant future rather than a depiction of the immediate future. Or, this new comic series may well reveal Spock and other members of the crew are on the new Enterprise without Kirk for some undisclosed reason.

Interestingly, this isn’t the first time Star Trek comics have split up the crew of the Enterprise. In the 1984, after the Enterprise was destroyed in the The Search for Spock, DC Comics created an entire storyline in which Kirk and the crew continued their adventures on the experimental starship USS Excelsior.

While this would end up directly contradicting the events of the canonical Trek films, the various writers of the comics — like Peter David — were able to bend over backwards to reconcile these events after the fact.

Right now, it remains to be seen whether or not IDW’s new series will hint at events in the next of the current Trek films or merely provide this version of Captain Kirk with a comic-book only distraction. Either way, for now, these are the voyages of the starship … Endeavour.