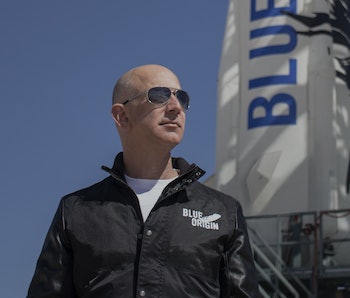 In a speech delivered during the International Symposium for Personal and Commercial Spaceflight (ISPCS) in Las Cruces, New Mexico, CEO Rob Meyerson confirmed the company was about a year away from launching people.

“This test got us one step closer to human spaceflight,” Blue Origin President Rob Meyerson said during the conference. “We’re still on track for flying people — our test astronauts — by the end of 2017, and then starting commercial flights in 2018.”

But before Blue Origin can send people up in their capsules, they had to show that New Shepard has what it takes to keep passengers safe during the climb to space. On October 5, the private spaceflight company did just that. During what promised to be their most daring test yet, Blue Origin showed the world that the crew escape system works during flight.

Each New Shepard rocket has two main components: a crew capsule — able to carry up to six passengers — and a rocket booster. To test out the escape system, mission control simulated an emergency. Just 45 seconds after liftoff, an alarm was triggered, signaling a problem with the booster.

The alarm ignited a small rocket motor underneath the capsule, which pushed it away from the booster, and allowed the capsule to land safely under parachute in the Texas desert.

According to Blue Origin, the test was a huge success, with all systems working well. As an added bonus, the New Shepard booster survived the maneuver.

When the escape motor ignited, it blasted the booster with 70,000 pounds of force — enough to knock it off-kilter, and send it plummeting towards Earth. Engineers fully expected to see the booster crash and burn. However, the New Shepard booster surprised everyone.

After the capsule jettisoned, the booster maintained its composure, despite the turbulent conditions. It continued the climb to space before conducting a series of braking maneuvers, and touching down gently, less than eight minutes after take off.

Both the crew capsule and rocket booster are being retired, never to fly again. Blue Origin is currently building new vehicles that will carry researchers and space tourists into space. Vehicle testing is set to begin within a few months.