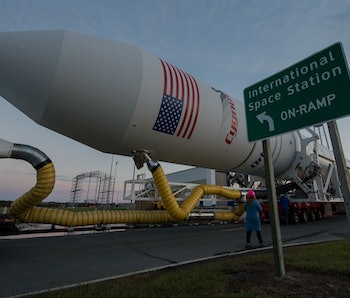 Update: The launch of Orbital ATK’s Antares rocket will be postponed 24 hours due to a ground systems issue. Currently there are no issues with the rocket or the spacecraft. The launch is now scheduled for October 17 at 7:40 p.m. Eastern. (You can read the original post below).

Cygnus, NASA’s cargo spacecraft bound for the International Space Station, will finally be lifting off on an Antares rocket on Sunday evening, and if you live anywhere on the northeastern coast of the U.S., you should be able to see it blaze its way into space.

Orbital ATK’s Antares rocket is set to launch at 8:03 p.m. ET from NASA’s Wallops Flight Facility on the Virginia coast, provided that Hurricane Nicole doesn’t interfere any more. You don’t have to be in Virginia for a decent view, though. The skies are expected to be clear, so if you’re on the East Coast between South Carolina and New Hampshire, you can see the rocket’s launch.

The rocket was scheduled to launch Thursday but was rescheduled to Friday due to some technical issues. It was rescheduled again when Tropical Storm Nicole (now a hurricane) hit Bermuda, home to a critical NASA tracking station. Now it’s scheduled for launch on Sunday, and the cargo craft Cygnus should reach the International Space Station on Wednesday.

No matter where you are on the Eastern seaboard, the rocket will be visible fairly close to the horizon not long after launch. If you’re in the Washington, D.C. area, the rocket will be visible 90 seconds after launch. New York City will be get a decent view at 8:05 p.m., while folks in Boston, Pittsburgh, and Charlotte, North Carolina can spot the rocket at 8:06 p.m. You can figure out the timing for your location on this handy rainbow map from Orbital ATK.