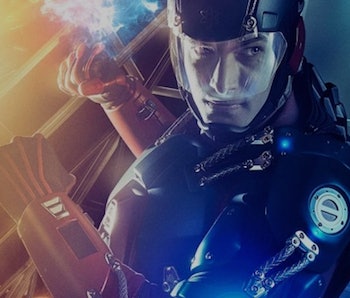 Who’s your favorite Legends of Tomorrow hero? Actress Caity Lotz, aka White Canary, just posted a video to her Twitter account hoping to answer that question for fans. She interviewed the entire CW Arrowverse family on their preferences, and the winning hero is a tie between Ray Palmer and Jax.

While there are some surprising revelations, like the fact that Stephen Amell likes Victor Garber’s Firestorm the most, both The Flash’s Grant Gustin and Arrow’s David Ramsey (citing his butt as the reason) voted for Palmer. Emily Bett Rickards, who plays Felicity Smoak/Overwatch on Arrow, and Melissa Benoist, who plays Supergirl, both diplomatically avoid giving a clear answer, and are perhaps worried about showing favoritism.

Maisie Richardson-Sellers, who plays Vixen on Legends, might have been the savviest of the lot by suggesting she should probably answer Sara Lance, Caity Lotz’s character on the show. However, Richardson-Sellers couldn’t help but root for her teammate Jax.

Personally, I’m a fan of Jax as well, but then again, I’m not in the Arrowverse, so I doubt my vote counts. Lotz, however, is probably just giving the rest of the Legends of Tomorrow team some encouragement, given the fact that an IMDb poll listed her character as the most popular by a wide margin, followed by Wenworth Miller’s Captain Cold. Given the fact that Miller is no longer a series regular on Legends, it might be time for a new second favorite character. Apparently, either Ray Palmer or Jax are that candidate.