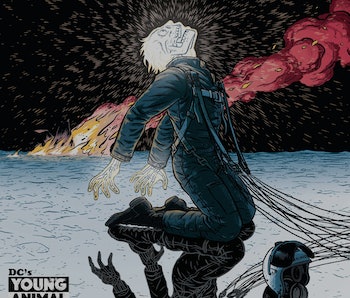 We’re two issues in on DC’s Doom Patrol, written by Gerard Way, and the series doesn’t make a lot of sense. The flagship of the Young Animals imprint for DC reboots the classic, gonzo comic series and seems intent on being better, and weirder, than all the previous Doom Patrol books combined.

The story’s entry point is Casey Brinke, an EMT driver who comes across a robot which exploded out of her partner’s gyro — as in, the food. From there, the book sort of travels between characters like Niles Caulder, Ricardo, Terry None, and Larry Trainor — and no, we don’t know who any of those characters are yet — before circling back to Casey. The story seems keen on being as ambiguous and trippy as possible, using Casey as a loose anchor point for readers. The only problem is, she’s not easy to understand either.

According to Casey, her mother flew into the sun when she was a child. Also, Casey has a constant toothache. As far as backstories go, that’s about as mysterious as it gets, and Casey isn’t in any hurry to explain herself.

She’s reminiscent of, well, any protagonist from a Haruki Murakami novel, existing at the center of strange events, attracting all kinds of weird characters, but throughout it all remaining downright apathetic to craziness orbiting around her. If Doom Patrol wasn’t a superhero comic book, it could easily fit alongside the magical-realism canon. In fact, it still may.

Likewise, every visual aspect of Doom Patrol works as part of a fantastic fever dream machine. Nick Derington’s illustrations alternate between flat and dynamic every other panel, while Tamra Bonvillain’s colors give the book a vibrating sense of urgency. Even Todd Klein’s letters are visually distinct, evoking Wes Anderson’s love of bold fonts on occasion. The book could remain abstractly incomprehensible for a good while as long as it remains as pretty as it does.

Doom Patrol is a superhero book swimming in beautiful design and narrative ambiguity. There are space aliens, robots, civilizations within food products, and some kind of meat conspiracy. It alternates between sci-fi and fantasy, evoking David Lynch and Saturday Morning Cartoons in equal measure. It might not be a book you’ll understand right away, but Gerard Way appears to be playing the long game. Even as he teases Doom Patrol’s ultimate ambitions, you won’t want to miss a ride as strange and pretty as this one.

More like this
Entertainment
6.29.2022 4:01 PM
Harley Quinn Season 3 could fix a major Batman controversy, trailer hints
By Eric Francisco
Entertainment
6.24.2022 11:15 AM
Behind the scenes at “Herogasm,” The Boys’ most NSFW episode ever
By Aaron Pruner and Jake Kleinman
Entertainment
6.16.2022 11:30 AM
30 years ago, Tim Burton made the sexiest and most sinister superhero movie
By Mónica Marie Zorrilla
Related Tags
Share: