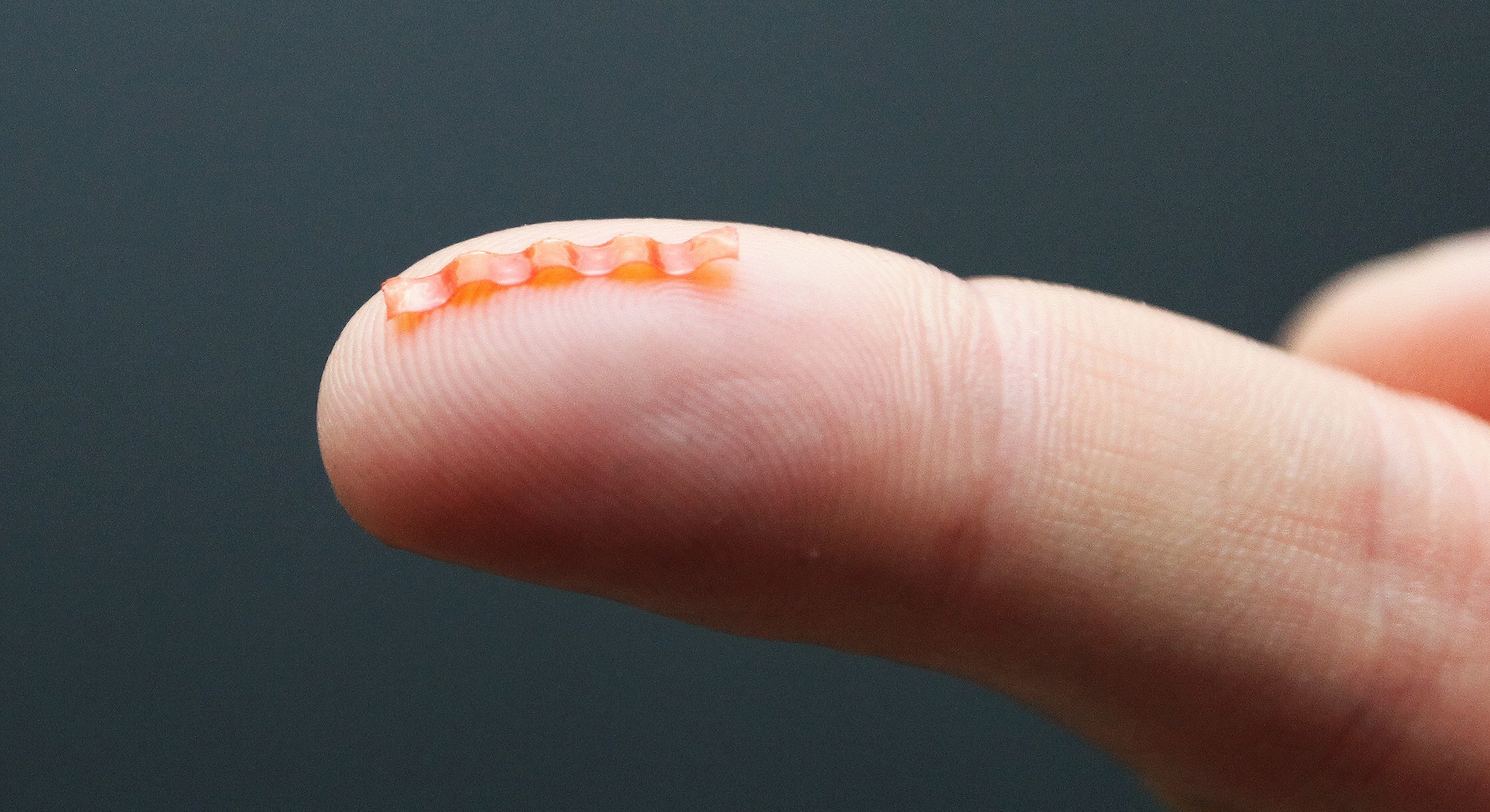 The evolutionary cycle goes something like this: Something is born, forced to compete for resources, and then allowed to pass on the traits that helped it survive to future generations. That’s how life got its start — and now the University of Warsaw is going to apply the same principle to a robot caterpillar.

The robot in question is a 15-millimeter-long strip of liquid crystal elastomer that changes its shape when it’s hit with a green laser. These changes allow the robot to move like a caterpillar on flat surfaces, climb slopes, and squeeze through small openings. It’s a breakthrough in building small, soft, light-controlled robots, and it will become even more interesting after the people who created it make it fight to the death.

Well, kind of. The researchers will actually be running tests to see what aspects of these pseudo-caterpillars most affect the speed with which the robots move. “Which parameters would be optimal for the caterpillar to go fastest?” University of Warsaw faculty member Piotr Wasylczyk tells Inverse. “Well, you can sit at the computer and you can start modeling, and after many, many years you’ll come to the conclusion that it’s too difficult a problem. We want to go a different way.”

This process will pit robots — with tiny variations in their length, width, and other properties — against each other to see which is the most capable. The winners will pass on some of their traits when the researchers create new robots, and the losers will be discarded. Wasylczyk says that’s one of the benefits of working on such a small scale: Researchers can design and produce many robots very quickly. Think of it as the evolutionary process being scrunched down from millennia to months.

This is a fitting next step for the robot caterpillar. The robot actually got its start as a micro-robot that was supposed to swim through water using similar light-harvesting technologies. Wasylczyk says those robots didn’t work: The robots were only five-to-ten microns large, which combined with water’s conductive qualities, meant they couldn’t get enough energy from the laser to move. He compares this to a human trying to swim through a pool of very thick honey.

Experiments with similar robots on land didn’t fare much better. “Imagine that you are scaled down to five-or-ten microns big. What’s your biggest obstacle in life?” Wasylczyk asks. “The biggest challenge, if you are so small, is the adhesion of your leg, to the surface you’re standing on. Actually, if you ask biologists what is the smallest creature that can walk on a dry surface, they’ll look into their database and tell you it’s one parasitic wasp that’s about 100 microns long.”

The researchers, like their robots, had to evolve. So they decided to make their caterpillar bigger, which resulted in the robot they have today. Working with something that’s 15 millimeters long, is much easier than trying to work with something that’s just a few microns big — and this new robot still allows them to prove that lasers and liquid crystal elastomer can be used to create robots that don’t rely on large power sources or complex machinery.

Others are chasing similar goals. Researchers announced a robot that runs on rat heart cells in July, and in August a team at Harvard revealed a soft robot called Octobot. All of these advancements are helping robots become more than large, metallic objects that rely on traditional batteries and standard remote controls.

The trick is to rapidly iterate on these prototypes to learn more from them. That rat-heart-cell-powered stingray has been abandoned so its creators can learn more about engineering tissue, and Octobot still has to learn how to crawl, swim, and interact with its environment. Those iterations are going to take time — the researchers at the University of Warsaw hope their artificial evolution will help to greatly reduce the time it takes for them to iterate on their robot caterpillar.

“We’ve actually started that experiment, but it’s going to take some time,” Wasylczyk says. “Another idea is that since we can make many of these robots relatively cheaply and easily — and by many I mean hundreds or thousands — people are very, very interested in collective behavior. If you scatter a handful of these, which would mean hundreds, and they could somehow interact with each other, it would be very interesting to see how a swarm of such robots behave.”

That’s right: After the robot caterpillar starts to evolve, its creators are going to see if they have something resembling survival instincts. From water, to land, to giant herds that only allow the strongest to thrive, these robot caterpillars are like tiny representations of the path humans took to get where we are today.