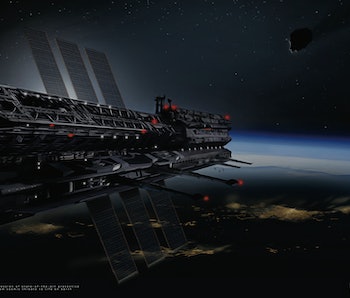 During a press conference on Wednesday, an international team of experts came together to announce a new project called Asgardia — a proposal to build the first ever nation in outer space. The proposal calls for using Asgardia not simply as a platform for people to live and work in space, but to specifically aid the mining of asteroids and the defense of Earth from meteorites, space debris, and whatever else might pose a threat to human here on the ground.

“Asgardia is a fully fledged and independent nation, and a future member of the United Nations — with all the attributes this status entails,” said Igor Ashurbeyli, a Russian scientist and businessman who founded the Asgardia project. “The essence of Asgardia is peace in space and the prevention of Earth’s conflicts being transferred into space.”

Now, what exactly Asgardia is supposed to look like in its final iteration is still very unclear. But in the short run, the project calls for launching a prototype satellite in fall 2017 (to coincide with the 60th anniversary of Sputnik’s launch) and rapidly move forward with building and launching a permanent, operational space station which would act as a full, legalized nation state in Earth’s orbit.

Asgardia would also double as a “a state-of-the-art protective shield for all humankind from cosmic, manmade, and natural threats to life on earth such as space debris, coronal mass ejections, and asteroid collisions,” as stated by an emailed press release.

Besides Ashurbeiyli — who is no stranger to audacious aerospace proposals, having previously pitched an idea for an autonomous space defense system — the project features other big names like David Alexander (director or Rice University’s Space Institute), Ram Jakhu (director of the Institute of Air and Space Law at McGill University), and Joseph Pelton (director of the Space and Advanced Communications Research Institute at George Washington University). All of these experts will be critical in helping to not only figure out the logistical and technological facets of Asgardia, but as well as the geopolitical and legal obstacles.

Right now, however, Asgardia’s major efforts center around getting its name out and getting money. The project is currently opening citizenship registration to the first 100,000 people who sign up. Asgardia is even calling on aid from the internet for creating its flag, insignia, and national anthem.

And what about money? It’s unclear exactly how where Ashurbeiyli and his team are going to get the funds they need to build Asgardia. Ashurbeiyli has put up some of his own money, but where the rest of the millions to launch the prototype satellite next year is going to come from is unknown. And for the whole project to meet its end goal of building, launching, and operating a space station, Asgardia will likely cost something on the order of hundreds of millions of dollars, or perhaps even $1 billion.

Moreover, it’s even less certain how the project will manage to claim itself as a wholly independent nation. Part of Asgardia’s goal seems to be a push into making international space law less ambiguous and to anticipate the changes of the 21st century.

“The project is creating a new framework for ownership and nationhood in space,” said the press release, “which will adapt current outer space laws governing responsibility, private ownership and enterprise so they are fit for purpose in the new era of space exploration. By creating a new space nation, private enterprise, innovation and the further development of space technology to support humanity will flourish free from the tight restrictions of state control that currently exist.”

It’s a crazy idea, but realistically speaking, some group was going to make a ploy to create a nation in space at some point. “As low-earth orbit becomes more accessible, what’s often called the “democratization of space, a pathway is opening up to new ideas and approaches from a rich diversity of participants,” Alexander said. “The mission of Asgardia to create opportunities for broader access to space, enabling non-traditional space nations to realize their scientific aspirations is exciting.”