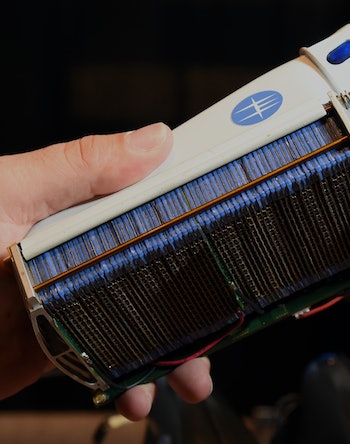 Solar energy has become the golden child in any debate about sustainable power lately, especially when it’s paired alongside batteries. Oh, and there’s wind, too, especially the ones those futuristic offshore wind farms harness. But there are other energy sources on the fringes of any discussion, where the facts are less established and questions are common.

There are many other energy sources out there just waiting to be used for transportation, batteries for our phones, or household electricity. Here are six of those potential fossil fuel replacements, the hipster choices for alternative energy.

It’s a zero-emission source of heat and electricity. A company called Alstom created a hydrogen-powered train scheduled to debut in Germany in 2017: It wanted a sustainable, zero-emission transport system that would use hydrogen fuel cells for energy.

The problem with hydrogen? It’s hard to extract in the quantities needed to power things like trains or smaller vehicles. The most common extraction method — pulling it from methane gas — also happens to produce carbon dioxide. (The hydrogen being used for fuel doesn’t do this; it’s a byproduct of the harvesting process.) That kinda misses the point of ditching fossil fuels.

Fuel for the deep fryer, maker of so many delicious fast food treats, cooking oil is just thrown away after use. What if, instead, vehicles ran on used cooking oil instead of gasoline? Or homes were heated with the oil? Well, they can be. It’s just not a popular choice.

Many engines have to be modified to use straight cooking oil instead of diesel, and even then using it as a fuel source can cause problems. Heating a home with cooking oil also requires either converting it to biodiesel or designing a system that can handle straight oil. It’s much easier to use the fuel these systems were designed to use — and to fuel up at a gas station instead of begging someone at a fast food joint to stop asking questions and hand over their used cooking oil. It’s possible but not easy. Maybe think about that the next time you put $50 into your gas tank, though.

Garbage, aka trash, aka rubbish

We recently learned that Estonia imported some 56,000 tonnes of trash from other countries. It then took that trash, burned it, and used it at a waste-to-energy plant. The country solved two problems with one move: It helped ensure that landfills weren’t overflowing, and it used something other than fossil fuels or coal to generate electricity for its citizens.

Burning garbage to create electricity does have its downsides, though. It leaves behind a bunch of waste that has to be disposed of somehow, and depending on what is burned, a bunch of carbon dioxide can be released into the atmosphere. This is less pronounced when burning the biomass (organic trash), but it’s still not a perfectly clean source of energy. Still, all that garbage has to go somewhere, and it could make more sense to burn it than to have it sit in a landfill.

It’s possible to build bioreactors that extract natural gas from the waste of both animals and humans. These bioreactors house bacteria that chow down on the nutrients left in the waste and release useful natural gas that we can use as fuel. It’s also possible to convert the waste (let’s just keep using that term) into hydrogen, which is exactly what Toyota wants to do with future cars.

There is one obvious downside, though, and it’s that working with manure isn’t glamorous. But that isn’t stopping researchers at the University of California from trying to convince the world that it’s ready to be powered by poop and the bacteria that breaks it down.

People have used wood as an energy source for a long time. It’s not the most efficient process, but wood stoves are still popular in many parts of the world, and wood can be used to create electricity. It can also be used to create a high-energy gas that is much more efficient at producing electricity than just lighting a bunch of logs on fire.

The problem: Getting wood to burn requires cutting down trees, which gobble up the carbon dioxide we want to remove from the atmosphere. While those trees can be replanted, and reforestation efforts might be taken more seriously if they had a direct impact on society’s ability to generate electricity, using this process at large could end up being more harmful than it is helpful for a while.

More and more humans love to run. An increasing number of technologists want to harness some of the energy produced by those movements to recharge batteries in smartphones, wearable computers, and other devices. Instead of plugging in to recharge these devices, the thinking goes, they could harness some of our energy. This would reduce our reliance on the electric grid and indirectly help the planet.

Yet many devices aren’t currently great at converting our movements to energy. Until more efficient tools are created — or people just start moving a lot more wildly — even something as small as a smartwatch won’t be totally powered by our movements. They’ll still have to be connected to a wall outlet to charge.