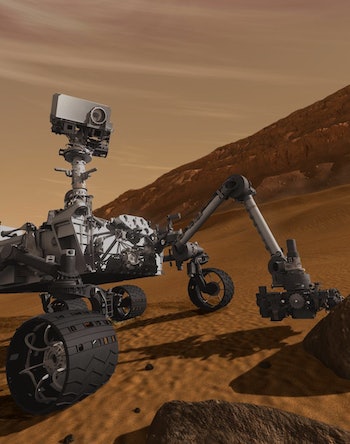 Tullis Onstott, a professor of geosciences at Princeton University, is on a quest to reveal the secret life of stone. Like most of us, he began his career with the view that the rocks beneath our feet are dead objects, but that perspective is changing thanks to a strange and wonderful subset of microbiology that has been hunting for the limits of life on Earth. The rocks are truly alive — even the marble that composes Michelangelo’s David teems with bacteria held in tiny pores, where it slowly reproduces despite its isolation.

Onstatt’s new book, Deep Life: The Hunt for the Hidden Biology of Earth, Mars, and Beyond, is a story of adventure that takes readers two miles underground in a South African coal mine, north to Canada’s frozen High Arctic, and all the way to Mars. It is set for release through Princeton University Press in November.

“Microbiologists have been hard-pressed to find any corner on the surface of the Earth, no matter how harsh the environment, that has not been colonized by some form of microbe that could be grown in the lab,” writes Onstott in the introduction.

And if life can continue for millions if not billions of years within solid stone, why not on Mars, which once held oceans of liquid water? Inverse reached Onstott by email to probe this and other questions, the answers to which might lay just beyond our current reach.

What’s the most astonishing thing you know about life on Earth today that you didn’t know 20 years ago?

From a personal point of view, because I was originally a geologist and didn’t know much about life on Earth in general, my astonishment may be greater than a trained microbiologist. I find it all amazing. But from the point of view of what I knew in 1997 about life on Earth and what we now know, I think what amazes me is that life in the deep subsurface is far more complex than we thought would have been the case 20 years ago. There is an enormous amount of activity that was hidden from us because of the interactions taking place between microorganisms and between microorganisms and viruses and multicellular organisms. Twenty years ago we thought that deep subsurface life didn’t do much of anything. That is no longer the perception. I have never ceased at being amazed at how life is capable of penetrating solid rock, and its tenacity in extreme environments.

Where is the boundary between life and not-life? How do you look for it?

This is particularly challenging as we do not have a general theory for life, so its definition is through the use of terms that describe what we think life should do, like utilize energy and evolve — NASA’s definition. As Carl Sagan once said, “life is a solipsism,” and so until we find true extraterrestrial life we will not know for certain how good our definition(s) are. Rest assured, we think organic carbon is the one element essential for life that is necessary — but as for a sufficient condition, that is debatable. So the only way to look for it is to try to search for signs of metabolism and growth.

We do not know the details of our own origin — not how long it took — but have a pretty good idea of the overall steps. It is because Mars’s early history is similar to the Earth’s in that it seems just as likely to have originated there as here, with some caveats — like the absence of a global encircling oceans — that may turn out to be deal breakers, but we do not know that yet. If life did originate along similar pathways as it did on the Earth then it will certainly be present beneath the surface, and it is quite possible that it has adapted to the surface environment as well, but obviously it has not proliferated across the Martian surface.

Is it possible that life on Mars seeded life on Earth? Is this a likely scenario, or wildly improbable?

It is possible, but we have no requirement so far for this to happen. There doesn’t seem to be anything especially conducive about early Mars for the origin of life as compared to the Earth’s early environment.

Are you worried about the possibility of accidentally seeding other planetary bodies with life from Earth? Is there any possibility that we’ve already done it?

All the time — we have definitely done this on Mars, but perhaps the seeds have not germinated because of the harsh conditions. Or perhaps they are definitely alive, but have not managed to move much beyond their lander. A good dust storm would definitely spread them around, but also expose them to ultraviolet radiation.

Do you believe that life on Earth may have arisen more than once? How would we be able to tell?

I have no doubt that the experiment was performed multiple times before the DNA-protein-DNA life form finally outcompeted the others. Theory suggests this is highly probable — isn’t that always the story? It will be very difficult to prove this for the Earth given the geological record has been removed. But we might find this is the case on Mars, given the better preservation of ancient rocks. Also, we might find places on the Earth where life is arising today — somewhere in the deep subsurface where the conditions are just right, (think of Darwin’s warm little pond two miles beneath the surface) but has not been contaminated by surface DNA forms.

Do you think the fundamental building blocks of life are the same anywhere in the universe? How different could alien life be from life as we know it?

Way different — more than you can imagine. Even with the same type of building blocks, the number of permutations indicates that all that life that was ever created on the Earth, including those that have gone extinct over the past 4.4 billion years, have sampled the teensiest fraction of total possible life forms.

How likely is it that there is intelligent life somewhere out there, looking for us as we are looking for them?

The ol’ Fermi Paradox. The new twist on this is that any civilization of comparable biology and technology will have likely built similar telescopes and be able to detect our planet orbiting our sun — perhaps even image our planet and listen to us. So why not reach out to us?