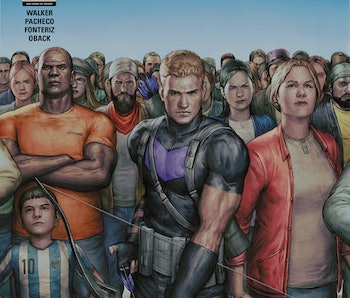 Hawkeye is ditching worldwide gigs to use his skills on a smaller stage: the American Southwest.

Marvel just announced its latest comic series: the Hawkeye-led Occupy Avengers, and with the announcement came some pretty great art. The goal here seems to be grabbing the attention of the “average American,” and some of the announcement’s language (“The question remains — who will stand up for the little guy?”) is really supporting that.

From what we know so far, it seems that Hawkeye will lead a ragtag troop of other heroes to “Put things right.” It’s also said that “Some call them outlaws, rebels, vigilantes. To others, they’re heroes, through and through.”

Some of the art reveals the presence of Red Wolf, who was Marvel’s first Native American hero. Traditionally, Red Wolf has some badass mystical powers and a wolf companion named Lobo, so we know that Hawkeye won’t be going into these ambiguous situations without some sort of super-powered backup … not that the master archer necessarily needs any.

Included with three panels from the first issue are two variant covers: the “Cho” and the “Hip-Hop,” which convey two completely different vibes. The “Hip-Hop” variant features brightly colored, larger-than-life versions of Hawkeye and Red Wolf standing before a veritable army of average citizens in sepia tones, all backed by a blood-red sky.

The “Hip-Hop” variant is certainly more menacing than its counterpart, the “Cho” variant, though the latter definitely wins the prize for “most mysterious.” Steel-jawed half-images of Hawkeye and Red Wolf’s faces appear above a decidedly road trip-esque map of the southern United States. Perhaps Barton and his crew will be doing more travelling than occupying after all.

The “Occupy” part of the title is the most ominous, so we wonder if Hawkeye and some of the Avengers will be occupying parts of the country they never have before. From the art, it would make sense: The panels below seem to be based in the American Southwest — deserts, sheer red rocks, and all.

In the above page, Hawkeye escapes fire on the back of a motorcycle using his high-flying skills to launch across a ravine — much to the surprise of his enemies.

Red Wolf (and Lobo?) charge against the same team of baddies who’d originally taken on Hawkeye and failed miserably.

In this final page, it seems Hawkeye finally gets to take the bad guys on how he likes it: head on with his trusty bow and arrow in hand, and a trick arrow to seal the deal.

Be on the lookout for Hawkeye and his new team of heroes on November 2.