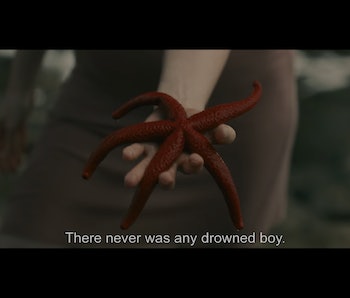 There are certain things we expect to be creepy as hell: like dolls in dark rooms, children singing, or hockey masks. Thanks to the French sci-fi horror flick Évolution, you can go ahead and add starfish to the list.

Évolution is a dystopian sci-fi nightmare that’s heavy on body horror and haunting imagery. It takes place on a dystopian island where young boys live with their terrifying, half-nurse-half-cult-member mothers, where the pounding surf and dripping operating rooms create a terrifying hellscape of dread.

After premiering at the Toronto International Film Festival last year, Évolution will be released in the United States on November 25. In the new trailer for the film, Nicolas, a young boy, discovers a dead body under the water just offshore, with a blood red starfish attached to its stomach. Trying to come to terms with what he’s seen and what it means, Nicolas finds himself hospitalized and very much at the center of this plot, complete with injections, incisions, and a deeply unnerving infirmary.

The trailer raises a whole lot of questions, though. Are these kids actually sick? Is this some kind of attempt to engineer a better-than-human human? What are these kids being injected with? And what’s up with the starfish?

Évolution arrives in theaters and on VOD on November 25.