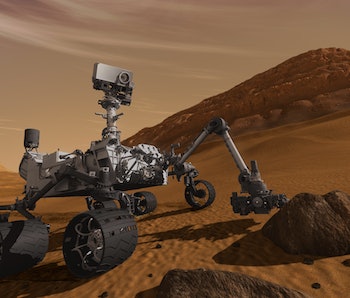 New NASA analysis shows that Mars’s weak atmosphere is a lot more complicated and dynamic than us Earthlings normally give it credit for. The insights come thanks to the Curiosity rover’s Sample Analysis at Mars (SAM) instrument suite, which has given scientists the first static mass spectrometry data ever taken on another planet.

“SAM’s measurements provide evidence of a really interesting process in which the rock and unconsolidated material at the planet’s surface have contributed to the xenon and krypton isotopic composition of the atmosphere in a dynamic way,” says Pamela Conrad with NASA’s Goddard Space Flight Center in a release. Conrad is also lead author of the report resulting from the work, published online earlier this month in Earth and Planetary Science Letters.

The researchers were particularly interested in counting isotopes of xenon and krypton, two rare noble gases that can provide telling information about the evolution of an atmosphere. They found that two particular isotopes of each element were more abundant than anticipated. This led the scientists to conclude that cosmic rays striking Mars rocks and dust led barium atoms to surrender neutrons to xenon, and bromine to surrender neutrons to krypton, in a process called neutron capture.

The result is an overabundance of xenon-124, xenon-126, krypton-80, and krypton-82 isotopes within the Martian crust, which would be released into its atmosphere over time through impacts with space junk or other processes.

Before Curiosity, what we knew about the Martian atmosphere came from studies of meteorites originating from the Red Planet. The ability to test the atmosphere from the actual surface of Mars greatly expands the amount of knowledge that can be produced, and could change our understanding of how planetary systems change and evolve.