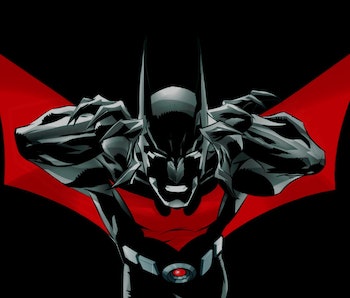 Here’s the thing about Fox’s Gotham: The timeline doesn’t make any sense. Based on observational details like the early 2000s-era cell phones and 90s-era cars, the show’s logic would line up better if Gotham was actually a prequel to a Batman story that takes place in the future, something like, say, Batman Beyond.

In FOX’s Gotham, Bruce Wayne is still a child who just lost his parents. Commissioner Gordon is still just a rookie detective who recently took a career detour into the private sector as a bounty hunter. Most of Batman’s villains are just young (but not that much younger) Gotham citizens who haven’t made the jump to supervillain status yet. The technology and scenery details around the city itself indicate that the show definitely takes place in or around our present day.

Canonically, Bruce Wayne lost his parents at the age of eight. Because Gotham hasn’t revealed any specific ages for its characters, that age is probably Bruce Wayne’s age in the show. Taking into consideration all of these factors — including the fact that Bruce Wayne doesn’t become Batman until he’s around 25-26 in Batman: Year One and possibly older than that, according to Christopher Nolan’s Batman Begins — Gotham’s Bruce Wayne wouldn’t become Batman until around the year 2033.

By then, most of Batman’s villains — even the ones closest to him in age in the comics — would be a good 20-25 years older than he is. This would make sense for someone like the Penguin, but not necessarily for the Riddler, Joker, or Carmine Falcone, who is already an old man in Gotham and would probably be dead by the time Wayne actually becomes Batman.

Now, as a reinterpretation of the Batman story, some creative liabilities were taken with the story’s characters. However, the show is famously bad at keeping its ages logical with respect to when Bruce Wayne becomes Batman. Poison Ivy, for example, was recently aged-up from a young teenager to an adult woman, jumbling the show’s ages and time differentials even further.

Trying to untangle all of those details would be a herculean task for anybody, unless we take the adjustments at face value. Maybe Bruce Wayne does become Batman in the year 2033, but maybe in Gotham’s universe, the mantle he eventually takes isn’t the one seen in most Batman comics. Maybe he takes Terry McGinnis’s place and becomes the hero of the animated series Batman Beyond, which takes place in the year 2040.

By then, most of the villains of Gotham, who are already pretty much becoming their supervillain alter-egos within the next year or two, would have enough time to spawn futuristic successors like the ones seen in Batman Beyond. Joker’s Crew could become an established presence by then and the only difference would be that Wayne takes McGinnis’s place as the Batman of the year 2040.

Or maybe Gotham just takes place in a time paradox dimension, separate from the canonized Batman storyline. Either way, fan theories are still probably more believable than the show’s actual timeline, which isn’t getting any stronger.