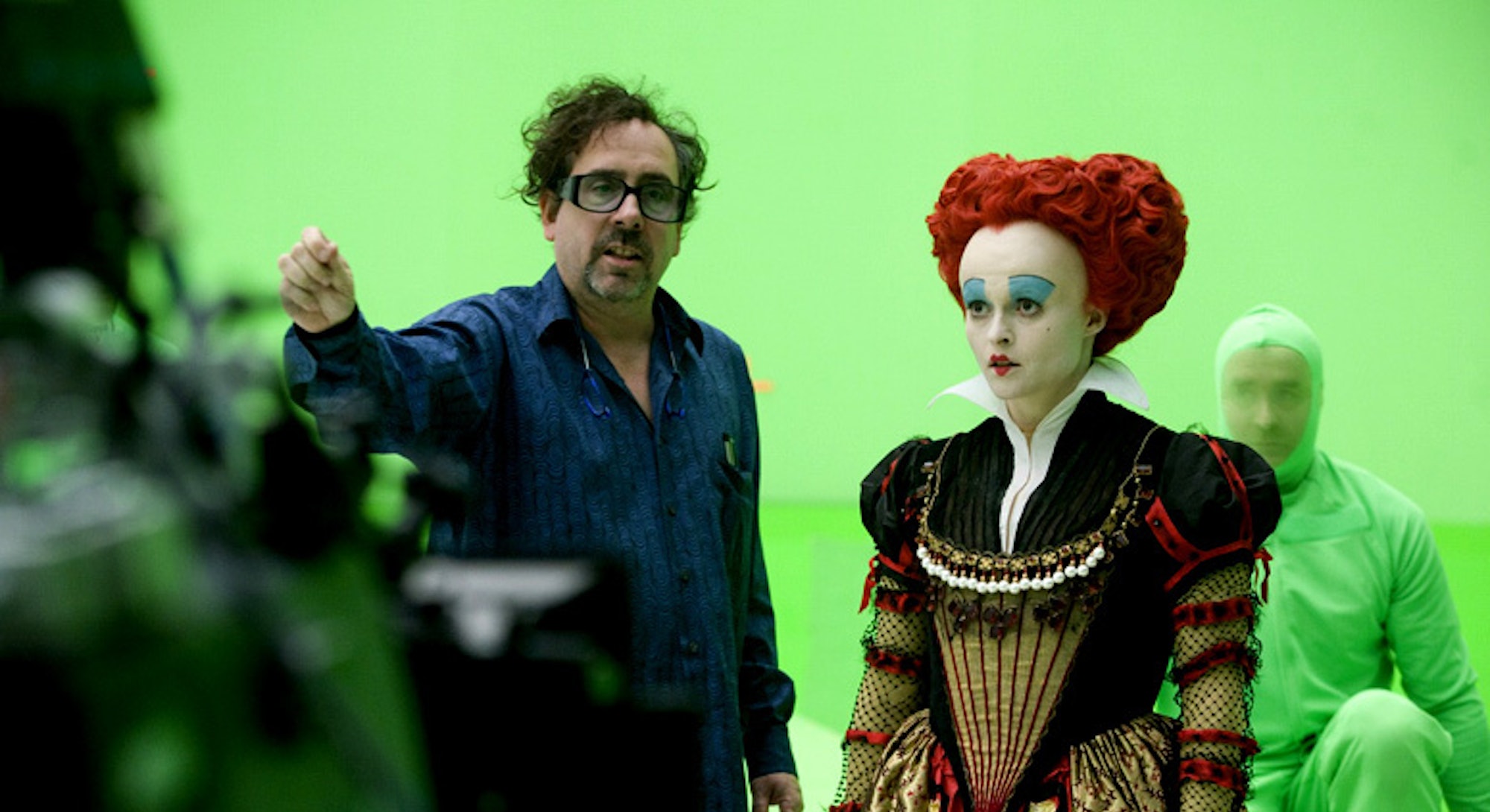 Tim Burton has spent three decades creating some of the most fantastical (and dark) words in cinema, and in doing so, has also helped pioneer the incredible growth in visual effects. He’s utilized everything from stop-motion to advanced CGI and blue screen to create these whimsical worlds, producing plenty of iconic scenes along the way.

With a filmography that includes classics such as Beetlejuice, Batman, Mars Attacks!, Alice in Wonderland, Sleepy Hollow to Charlie and the Chocolate Factory, Burton has utilized practical, miniature and digital effects in innovative ways. That continues in his newest release, Miss Peregrine’s Home for Peculiar Children. In anticipation of that new film, Inverse dove in deep on several of Burton’s effects innovations and talk to some of the VFX supervisors who have had to find their quirky side to collaborate with the director.

Burton had already worked in 2D and stop motion animation before becoming a director. With Beetlejuice, the director took advantage of experience in those areas to go above and beyond with the pre-digital effects work, including make-up, puppetry, miniatures and stop motion. Michael Keaton’s character as an animatronic snake, for instance, was crude but incredibly effective in scaring audiences.

In directing his two Batman films, Burton continued to embrace miniatures in a large way to deliver epic shots of Gotham and some of the various Bat vehicles. Batman Returns saw the director capitalize on the early use of digital effects, in fact, much more than visual effects supervisor Mike Fink had thought Burton would want at the time.

“I had imagined that the wide shots of masses of penguins, for instance, would have to be stop-motion animation,” says Fink, “with multiple passes to create the huge numbers of penguins in the street. All to be composited optically. By the middle of our schedule, I switched the plan to digital penguins, doing the animation at Boss Film, with Jim Rygiel as the Digital Supervisor for those sequences.”

Similarly, swarms of bats needed for a particular scene, which might have traditionally been done with real animals, ended up being achieved with digital counterparts (remember, this was still the very early days of CG; Jurassic Park had not yet been released).

Fink, again, recalls how the effects were solved: “I had my suspicions about the probability of success using real bats, and went to Larry Franco, the line producer, with an idea to test digital bats while he worked with Tim on wrangling a real bat test. When we brought in real bats to shoot a camera test, it was clear that this was not going to be a successful exercise. I had begun tests with Richard Hollander and his group at VIFX, which were looking good, but had been seen by no one.”

We were ready shortly after the failed live bat test, and Larry and I met Tim in the screening room where we showed him a few different shots of people - Richard’s digital artists - flailing at attacking digital bats in different lighting conditions. Tim was very happy with the tests, and we were off and running.”

Fink would return as one of the visual effects supervisors on Burton’s alien adventure Mars Attacks!, at a time when digital VFX was really hitting its stride and becoming a large part of Burton’s arsenal. The martians and spacecraft could have perhaps been realized with stop motion (in fact the original plan was to shoot 15 armatured Martian puppets and composite them into live action backgrounds), but the director saw a test by Industrial Light & Magic for the martians and knew the characters could achieve the emotion he desired.

Fink himself supervised VFX at a brand new facility called Warner Digital Studios, which produced shots of the flying saucers, the giant robot attack and shots in the Las Vegas desert. “Mars Attacks! was such terrific fun, both when we read the script, while we were planning, shooting, and in post, he says. “It wasn’t often that folks like us are asked to do things that had a ‘quirky’ element. Whimsical and almost comical, but also photorealistic. But that was a challenge.”

“Tim was wary of digital effects in those days, adds Fink, “and was worried about things looking too computer-y. We worked hard to create believable photoreal textures and shaders for our CG objects, but left it to the animation to sell the whimsical or comical aspects of each shot. For instance, the interior of the saucers, done at ILM under the supervision of Jim Mitchell, with animation supervision by Dave Andrews, had two pilots flying the saucers - based on art from Tim and the cards. I thought that two pilots who would constantly be compensating for what they each did would impart a funny motion to the saucers, and except for the very militaristic looking attack on Earth from Mars, we gave them a distinct wobble as if each pilot was over-compensating for the corrections of the other.”

Several of Burton’s next batch of films, including Planet of the Apes and Charlie and the Chocolate Factory, had intensive effects, while others, such as Big Fish, had with more subtle (but plentiful) VFX work. Burton then tackled his biggest visual effects project thus far: Alice in Wonderland. The film wound up with a whopping 2,300 VFX shots, primarily owing to it being shot mostly on green screen and because it featured many well-known Lewis Carroll characters, almost all done in CG.

Alice was perhaps the perfect project for Burton. The film had a fantastical storybook quality and a decidedly dark side, too. With so many VFX shots, the director turned to the experienced visual effects supervisor Ken Ralston (a four-time Oscar winner) from Sony Pictures Imageworks. Ralston told Studio Daily in 2010 that he jumped at the chance to work with Burton.

“We’re very different, but we had such shorthand. We had similar bizarre taste. We were looking at one of our caterpillar shots and Tim said something about Zanti misfits. I just cracked up. Zanti misfits were little animated ant characters in an Outer Limits television show. There was something in the caterpillar’s face that reminded him. I stopped everyone and asked if anyone but me knew what he was talking about. There was silence.

Around ninety percent of the film was captured on green screen stages, necessitating the use of many stand-ins for what would later be digital creatures like the Jabberwocky or augmented characters, such as the large headed Red Queen played by Helena Bonham Carter.

With Peculiar Children, Burton returns to a slightly more subtle approach to visual effects, although the many magic talents of the film’s characters and creatures could not have been possible without visual effects. Amongst the biggest shots are an underwater sequence and a skeleton fight, conceived as an ode to famed stop-motion animator Ray Harryhausen. There are also plenty of make-up effects solutions and unusual designs that are the hallmarks of Burtons work.

One of the film’s visual effects supervisors, Ollie Rankin, who worked at Double Negative on the project, provides his view on Burton’s approach to VFX on the film and in general. “Tim’s films rely quite heavily on VFX, but also throughout the making process he is heavily involved in the art direction of movies,” he said. “You can say there’s something very Tim Burton-esque about it. His name is ascribed to a certain style of creepy and surreal fantasy. And I think that vision carries all the way from hand-drawing right through to paying a lot of attention to the way things move, the way things are lit.”

Fink shared that sentiment. “Tim is a pleasure to work with. His drawings and sense of exactly what he needs are great aids to delivering good work. On the films I worked on, Tim kept his plans fairly loose, often wanting to wait until he had the actors on a set to discuss what the camera might do. But he never second guessed himself or led us to prepare for something we didn’t use.