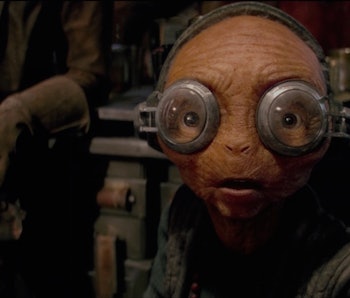 Maz Kanata and Han Solo have been friends (well, as far as smugglers go) for years, and it only makes sense that the wizened barkeep would show up for his funeral.

Speaking to Ellen DeGeneres, Lupita Nyong’o confirmed she filmed her Maz scenes for Episode VIII ages ago and had “hurt feelings” that fans thought her beloved 1,000-year-old character might not be returning for the sequel to The Force Awakens. But what might Maz be doing in Episode VIII? Offering more sage advice to Rey about how to get in touch with the Force? Advising Leia and the Resistance on the best strategies to take down “those beasts” running the First Order? Opening up a new bar and throwing a giant party? All of the above might work, but we think Maz Kanata will probably be attending Han Solo’s funeral, first. Some might have thought Carrie Fisher was joking a few weeks back when she mentioned the notion of Han Solo’s funeral in Episode VIII, but it’s not that crazy from a basic storytelling perspective.

Historically, Star Wars has shown more funerals than you might think, and for the most part, they’re always pivotal moments. The conversations during Qui-Gon’s funeral in The Phantom Menace arguably set into motion all the conflicts in Episodes II and III. The funeral of Shmi Skywalker (Anakin’s mother) in Attack of the Clones solidifies his resolve toward garnering more power over life and death. Padmé’s funeral in Revenge of the Sith establishes the fact that she died believing in the good still present in Anakin. And, of course, the funeral of Darth Vader in Return of the Jedi shows us Luke coming to terms with the good man Anakin once was.

This is all to say that a funeral for Han Solo, however brief it might be, would be a great way for Episode VIII to gather a lot of its characters together (including Maz Kananta), establish some big themes, and allow for the audience to feel what these people are feeling in our favorite galaxy far, far away.