The most far-out record in the galaxy — literally — is NASA’s Voyager Golden Record. In 1977, the agency sent the LP, which features images, sounds, and songs thought to represent Earth, into space on the Voyager missions as a potential way to introduce mankind to vinyl-loving aliens. Now, finally, the record is getting a re-release on Earth.

Only 12 copies of the record were made in the first pressing. One was given to President Jimmy Carter, nine were awarded to NASA centers, and the other two are each about 10 billion miles away from Earth somewhere deep in space onboard the Voyager 1 and 2 missions.

In other words, if you wanted to jam out to the same smooth tunes as E.T. might be dancing to right now, you were probably out of luck. (On vinyl, at least. The audio is on NASA’s Soundcloud account.) However, a Kickstarter spearheaded by Boing Boing editor and Institute For The Future research director David Pescovitz is bringing the Golden Record back to Earth.

The Kickstarter has already well surpassed its goal, and Pescovitz teamed up with Amoeba Music and a graphic designer to reissue the remastered record. It’s going to be pressed on golden vinyl, because the originals were made of gold-plated copper disks that were better equipped to deal with the harsh nature of space travel.

The reissue will cost $98, and should be ready for release in time for the Voyager mission’s 40th anniversary next year. 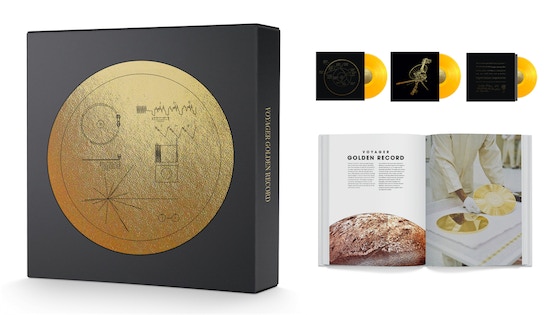 “Johnny B. Goode,” written and performed by Chuck Berry

Bach, Gavotte en rondeaux” from the Partita No. 3 in E major for Violin, performed by Arthur Grumiaux

“Melancholy Blues,” performed by Louis Armstrong and his Hot Seven

Holborne, Paueans, Galliards, Almains and Other Short Aeirs, “The Fairie Round,” performed by David Munrow and the Early Music Consort of London

“Dark Was the Night,” written and performed by Blind Willie Johnson

Greetings from the Secretary General of the United Nations, Kurt Waldheim