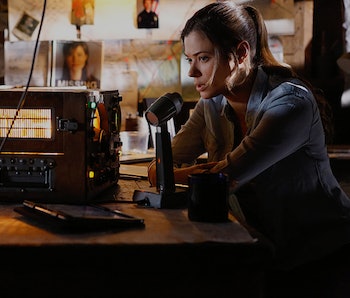 Frequency — a series premiering October 5 on the CW inspired by the 2000 film of the same name — is the latest sci-fi series attempting to bend the limits of time with the obscure — and insanely complicated — theory of quantum mechanics.

In Frequency, Raimy Sullivan communicates with her dead father, Frank, through a radio. We see Frank in 1996, setting his cigar on the radio as he talks to Raimy; he forgets the cigar is there, burning the top of the radio case. That same burn shows up again in 2016.

There’s plenty of temporal tomfoolery that could be at play here, including the idea that just by talking to her father, Raimy is altering timelines and, as a result, altering her present (and radio equipment). Though we don’t yet know the show’s explanation for the phenomenon, there’s a possibility that the radios in Frequency might be relying on the sci-fi quantum entanglement explanation.

But science fiction has taken this theory to a new level, like the quantum entangled typewriters from Fringe, which were frequently used to communicate across alternate universes. When someone typed a phrase on an entangled typewriter in one universe, the message was typed out on the typewriter in the other universe — kinda like AIM but with fewer away messages and more complex quantum theory.

Theoretically, if Frequency’s radios were quantum entangled, they’d be communicating across time, not across universes like Fringe’s typewriters. And sure, it doesn’t strictly adhere to the concept of quantum entanglement as we understand it. But it is science fiction after all, and it seems like a plausible theory as any right now, prior to the show’s airing.

Though it doesn’t have anything to do with radios and talking in supposed real-time across 20 years’ time, quantum entanglement in the context of time is a real thing, and it could have real applications — things like quantum entangled time capsules.

Whether or not Frequency uses quantum mechanics to explain the odd behavior of its radios, it might further the conversation on speaking across multiverses.