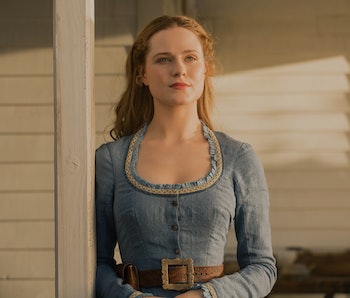 A new NSFW trailer for HBO’s upcoming series Westworld has just been released, and it focuses on some very violent robot dreams from Evan Rachel Wood’s character, Dolores Abernathy.

It’s the first specific example of footage we’ve seen hinting that the focus of the highly anticipated series — executive produced by J.J. Abrams, Jonathan Nolan, and Lisa Joy — will primarily be told from the point of view of the robots that populate the near future old west theme park instead of its human attendees. Michael Crichton’s original 1973 movie focused on the humans discovering the malfunctioning A.I.

Over footage of Dolores going about her day and riding into town on horseback, theme park creator Dr. Robert Ford (Anthony Hopkins) gives some seemingly straightforward voiceover: “Dreams mean everything. They’re the stories we tell ourselves of what could be, who we could become,” he says. “Oh, Dolores, do you know where you are?”

After a shot of her noticing her reflection in a window, she responds, “I’m in a dream.” The footage shows that this particularly insane dream will be more like a nightmare.

It’s a concept that isn’t anything new for this type of cerebral sci-fi, and it looks like it’s taking its cues from other robots struggling to understand their inhumanity in things like Blade Runner or Battlestar Galactica.

But before you can get caught up thinking about all the ethical artificial intelligence hypotheticals, soon enough Roy Orbison’s “In Dreams” kicks in over footage of some grisly shootings, stabbings, and what looks to be a scalping by the robots of the theme park run amok.

We like the use of the song, which was previously used in another creepily iconic way in David Lynch’s Blue Velvet.

As for the rest of the Westworld clip, we even get to see some new footage of Ed Harris’s the Man in Black, who we recently learned was actually a human who goads the park robots into revolting against their human creators.

Strangely enough, the trailer wasn’t officially released by HBO. Instead, fans discovered it via the show’s viral site called “Discover Westworld” where you make such mistakes as booking a stay at the park and learn about all the faux utopian things it promises including entering an “unparalleled, immersive world where you have the freedom to become who you’ve always wanted to be — or who you never knew you were.”

Discover what you hope will never happen to you when Westworld premieres on HBO on October 2.