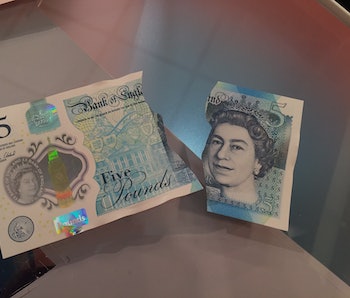 Before Tuesday, many had assumed the UK’s new £5 note (worth around $6.63) was basically indestructible. Unveiled in June by the Bank of England, the UK’s central bank, the note is made of a polymer that’s much harder to tear than its paper-based predecessors. You can still tear them, though, as Piers Morgan demonstrated on Good Morning Britain when he bit apart the new note on live television.

It’s neat stuff, but it’s analog improvements for a digital age. Figures from Statista show that 70 billion cashless transactions took place in Europe in 2005. That figure rose to 121 billion in 2015, and is projected to reach 177 billion by 2020. As contactless and cashless grow in popularity, the note could soon become a relic.

The notes were officially released in England and Wales on Tuesday, but it’ll be a while before they’re in the hands of the general public: several north London banks told Inverse that it’ll be around a month before they arrive in branches. One branch explained that, as most ATMs dispense £10 and £20 (set to go plastic in 2017 and 2020 respectively), there won’t be many banks clamoring to stock up.

The new notes are incredibly durable. Unlike former currency, which was susceptible to sogginess and tearing, the polymer design allows for bending, pulling, and dipping in liquids with ease.

Over 30 countries use similar notes, including Canada (since 2011) and Australia (since 2001). If anything, the arrival of plastic money in those countries sounded the death knell for cash transactions. In Canada, an August 2014 report from Canadian Business found just 10 percent of consumer transactions used hard currency. The Reserve Bank of Australia found that in 2013, cash accounted for just 47 percent of all transactions.

The UK, now a full member of this club, seems to be heading in the same direction. The Payments Council found in 2015 that 52 percent of transactions were electronic in 2015. In London, the tube system has rolled out a contactless payment system, one which it now plans to sell to other cities.

So why go plastic? If anything, the notes’ durability could be a benefit as society shifts. The BBC reports that the new notes will last for five years, unlike the original notes that lasted just two years. It’s not a stretch to think that the printers could wind down production in the knowledge that currently-circulating cash will last for that bit longer.

Contactless is only improving, too. Samsung, Apple and Google have all launched their own payment systems, with Apple expanding its system this month to make online Mac payments simpler. Upgrading physical notes means that, when contactless does fail, the plastic notes are more dependable and easier to keep pristine.

The abandonment of rapidly-deteriorating paper sheets, switched out for something slightly longer-lasting, makes sense in the face of advancing cashless transactions. It’s the swan song of a trusty friend, the last gasp of a technology set to be sidelined. The plastic notes are cool, but the coming shift is going to be even cooler.

More like this
Science
5.5.2022 10:30 AM
A massive societal problem for humans is also harming animals
By Tara Yarlagadda
Gaming
5.2.2022 1:30 PM
Japanese game studios are paying their employees more for a surprising reason
By Hayes Madsen
Innovation
5.13.2022 11:00 AM
These robots have one special skill that could make human chefs obsolete
By Sascha Brodsky
Related Tags
Share: