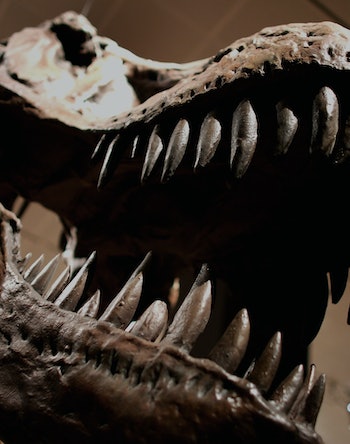 It was the greatest drama to hit the world of the dinosaurs since the asteroid hit. In the 1870s, European settlers headed West in search of land and riches found a different sort of treasure: ancient, enormous bones.

Edward Drinker Cope and Othniel Charles Marsh, two very wealthy New England scholarly types, were determined to make a name for themselves collecting, naming, and describing these fantastic beasts. Their relationship began collegially enough, but soon descended into bitter rivalry. Ego and competition trumped even the most basic scientific ideals — the men are accused of going so far as to dynamite the remains of bone-rich quarries in an effort to prevent the other from getting at specimens potentially left behind.

“From the perspective of 21st-century science, that’s sacrilege,” says Lukas Rieppel, a science historian with Brown University. “Then nobody knows about them. That’s an amazing thing for a scientist to do.”

If you aren’t familiar with the story of the Bone Wars, you will be soon. Michael Crichton, of Jurassic Park fame, may have died nearly a decade ago, but he left behind a nearly-done novel that fictionalizes the story of Cope and Marsh. Sherri Crichton came across the manuscript — titled Dragon Teeth — in her late husband’s files, and HarperCollins plans to unveil it to the world in May 2017. National Geographic has already scooped up the rights for a television adaptation.

“The story unfolds through the adventures of a young fictional character named William Johnson who is apprenticed first to one, then to the other and not only makes discoveries of historic proportion, but transforms into an inspiring hero only Crichton could have imagined,” according to a HarperCollins news release.

“I’m very excited to see more interest being paid to the history of paleontology, because I think it’s an important chapter in American history in particular, and the history of science in America,” says Rieppel, who has focused on this moment in his own research. But if you ask him about the Bone Wars, it’s not the dramatic moments of interpersonal conflict that he’ll want to tell you about.

This was the Gilded age, when America had ambitions as an imperial power, and European immigrants headed west for their share of the bounty. The Bone Wars, says Rieppel, would never have occurred outside of the context of this capitalist, expansionist, extractive mindset. In fact, although they sought fossils and not gold, Cope and Marsh behaved very much like mine barons, competing for the biggest finds, the most competent staff, and the most dazzling plunder.

And it could reasonably be described as plunder, says Rieppel. “When we say that dinosaurs are ‘discovered’ in the 1870s, what we mean is that white people discovered them.” Native American people in the area knew of these deposits of large bones, and had their own stories about where they came from, and their cultural value.

But America’s ambitions rested on a myth of the West as an untamed land “It’s often depicted as this place that has no history, this empty, virgin territory,” says Rieppel. This allowed for the appropriation of lands from Native Americans, and the extraction of anything of monetary value from it. This extended in equal measure to dinosaurs.

Will Crichton’s novel delve into the subtleties of this complicated history? Rieppel says he won’t be holding his breath, although he wouldn’t be terribly surprised. “[Crichton] was an interesting character, whose politics I often disagree with, but he could be quite thoughtful about the relationship between science and society.”

In real life, the Bone Wars saga ended in Cope’s defeat. Collecting bones isn’t cheap, and Marsh was better funded to begin with. Later, Cope took a bad bet on a silver mine that left him unable to compete on par with his rival. Towards the end of his life, he sold many of his collections to the American Museum of Natural History in New York.

“You can still go see some of those very early specimens on display,” Mark Norell, the current chair of the museum’s paleontology division, tells Inverse. Notably, an Allosaurus skeleton collected by Cope is now mounted in the museum’s Jurassic dinosaur hall. It was among the very first carnivorous dinosaurs to be mounted in a lifelike pose.

Still, Norell isn’t counting on a visitation boost from the Crichton treatment. “Believe it or not, Jurassic Park really did not create a huge spike of interest,” he says.

Apparently, dinosaurs can have a pop culture moment without that translating into interest in the often unglamorous work of paleontology. And when a story focuses on conflict and drama, there’s a risk of losing sight of the science.

“The way paleontology was done in the late 1800s is very, very different than the way it is done today — just like the archeology that’s presented in Raiders of the Lost Ark is very different from the archeology done today,” says Norell. “We’re not just going out there trophy hunting for things to put in display on museums. We’re more looking for particular things that tell particular stories, and help us fill in and test specific hypotheses. You don’t want the public going away thinking that this is the way we do things.”

Cope and Marsh’s brutal conflict might be what makes the story worth telling, but they were both human and scientists. As scientists, they were driven not only by a desire to best their rival, but to uncover the secrets of the natural world around them.

Norell expects the publisher will send him a copy of the book when it’s out. “They send me a copy of all of these things. Whether I read it or not is a different thing,” he laughs.

“I’ve been pretty critical of Michael Crichton’s scripts back in the day, because it just seems like every chance he’d get, he was trying to make scientists look like Machiavellian assholes, out to destroy the world.”