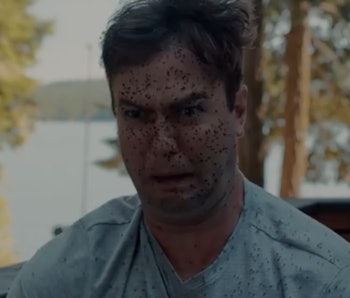 In the age of big-budget CGI and mind-blowing visual effects, it’s good to know that some movies are still sticking to classic Hollywood filmmaking traditions — like sprinkling real bugs on their star actor’s face.

Sure, there aren’t a whole lot of crazy stunts in the new indie comedy Brother Nature, which stars SNL buds Taran Killam and Bobby Moynihan as very mismatched future brothers-in-law. It’s a relationship comedy set at a lake house, after all, so awkward interactions and slapstick moments were far more important to the script, which Killam also wrote. But when the time came to put themselves on the line for their (very goofy) art, the two actors went all-in.

To wit: In one scene later in the film, Killam’s character Roger is banished from the cabin in which he’s staying with his girlfriend (Gillian Jacobs), her sister Margie (Sarah Burns), and Margie’s boyfriend Todd (Moynihan). He sleeps on a bench outside instead, which turns out to be a pretty terrible decision. The next morning, he wakes up with hundreds of ants crawling all over his face and body. Instead of adding them in post-production via CGI, Killam opted for the real thing.

“They were flightless gnats and we had bug wranglers come in and put them all over my face,” Killam said in a recent interview with Inverse, which you can watch here. “I was cool with it, but nobody around me enjoyed it. I was like, great, throw them on there. I’ve had bugs on me before. The only time it got slightly uncomfortable was when they would climb into your ear canal and they talk over your whole brain and you hear buzzzz.”

Killam went on to make a startling revelation: The bug wrangler was actually a sentient pair of Wrangler jeans, which spoke through its pants mouth (or, as we’d call it, the zipper).

Moynihan also put himself on the line: A later scene depicts him rising straight up out of the water on a powerful hovercraft-like device with Killam in his arms. It’s a dramatic scene, and the making of it had even higher stakes.

“I was absolutely terrified at first, and then I didn’t want to get on them, because they were super fun,” Moynihan remembered. “The stunt people said the jet boots weren’t powerful enough, but the next day, they took the motor off their jet ski or speed boat and connected it to a bigger propeller … We tried it a couple times, and I couldn’t get it. I truly believed Taran whispered ‘he isn’t going to get it,’ and I was spurred to do it. I got one shot and I did it: The one shot of me lifting him out of the water.”

They were both exhilarated and terrified, Killam added, as they let out “the most primal screams” imaginable. And with good reason: The second the camera cut, they fell like harpooned dolphins into the lake. Movie magic.

Luckily, there is an old stunt pro on the set of Killam and Moynihan’s next movie, Why We’re Killing Gunther: Arnold Schwarzenegger, who plays the titular master assassin. The movie, which marks Killam’s directorial debut, features Schwarzenegger both utilizing his action skills and spoofing his own image.

“It’s sort of a mockumentary-style action comedy about hitmen,” Killam says. “It’s a group of up-and-comers trying to make a name for themselves by killing the most respected, reviled hitman: Gunther. He was willing to do some crazy, insane, and ridiculous stuff.”

If you can believe it, Killam says that a lot of Schwarzenegger’s stunts in Gunther were even crazier than the ones Arnold pulled off in Jingle All The Way.

More like this
Entertainment
Jan. 27, 2023
Onyx the Fortuitous and the Talisman of Souls is a cringe comedy as overlong as its title
By Andy Crump
Science
Jan. 28, 2023
The best mystery thriller on Netflix ignores a basic fact about hydrogen energy
By Tara Yarlagadda
Culture
Feb. 2, 2023
After Harry Potter, Daniel Radcliffe Obviously Had to Play a Farting Corpse
By Alex Welch
LEARN SOMETHING NEW EVERY DAY.
Related Tags
Share: