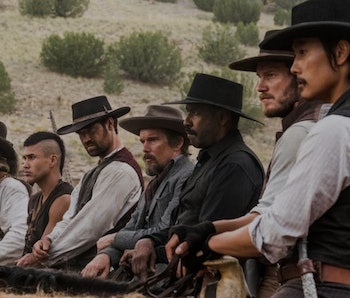 There is often outrage, or at least a collective groan, that follows the announcement of a classic film’s remake. Why can’t Hollywood come up with new ideas, we ask, and not often without justification; there is no shortage of dispirited, by-the-numbers rehashes dumped into theaters every year. Undoubtedly, some fans of old westerns lamented the news that John Sturges’s classic cowboy flick The Magnificent Seven was being remade by director Antoine Fuqua. Anyone making that complaint, however, likely forgot one key detail: The Magnificent Seven was also a remake.

Released in 1960, Sturges’s film was a westernization of legendary Japanese director’s 1954 film, Seven Samurai. The titular warriors were replaced with gun-slinging cowboys, and the desperate villagers that they agreed to save were made into poor Mexican farmers and laborers. It was, in effect, a white savior story; Yul Brenner, as Chris Adams, led a lineup of six other swaggering and/or do-gooding hired hands, and they headed south of the border to protect the villagers from a well-armed Mexican looter named Calvera (played, as was the custom of the time, by the Polish-American Eli Wallach).

In Fuqua’s remake, the opening feature of the Toronto International Film Festival, the Adams character is named Chisolm and played by Denzel Washington. That casting immediately changes everything, even if the character, equal parts clever and noble, has not been changed much otherwise. From the moment he swaggers into a saloon, he is an outsider, stared down by hard-drinking regulars whose fingers rest on hidden triggers pointed his direction. Brenner is given a peaceful introduction in the 1960 film, but Washington isn’t afforded such a luxury; while the film is, as a whole, far more bloody and violent, with action set-pieces abound, his lightning quick mowing down of the joint — it’s them or him — announces him as a man not to be fucked with.

The town is somewhere in Southern California, and its commoners are entirely white. And so when two representatives of the town (Haley Bennett and Luke Grimes) appeal to Chisolm, they are two white people begging a black man to protect them in 1870s America. It is a radical sight, even if the film does not dwell on race as much as one might expect in a story set shortly after the Civil War. It’s more matter-of-fact, this unusually imbalanced relationship, which is its own statement.

Chisolm recruits a crew — making up the rest of the titular seven, of varying magnificence — and unlike in Sturges’s movie, it’s not all white. Byung-Hun Lee takes on the expert knife-thrower role, while Manuel Garcia-Rulfo is a quick-witted bandit. Martin Sensmeir plays Red Harvest, a Comanche who is an ace with a bow and arrow. Their race is also more matter of fact, which is somewhat odd, given the time period, but a better choice than the boatload of ethnic jokes and slurs that would have likely been bandied about.

The only hint at the era’s racial strife comes when Ethan Hawke’s Goodnight Robicheaux (what a name!), a former confederate soldier, talks about the war with Chisolm, a Union man who spared his life on the battlefield. The war was over, Chisolm says, though they know some people are still fighting it.

It may seem odd to have an almost post-racial western, but Peter Sarsgaard’s cold-hearted villain makes clear this is more parable than pastiche. He is a robber baron who pilfers the town’s goldmine, and offers townspeople a pittance for their land. While in the original film, the villain Calvera is stealing in part to feed his men, Bart Bogue is a rich monster who delivers a sermon early on calling capitalism the modern religion, and then burning down the town church. In short, he is more Wall Street than Wallach.

The film does fall short in areas, relying on big action sequences and failing to expound much on characters’ back stories or telling us much of anything about the townspeople; this is not a particularly deep film so much as it is a crowd-pleaser, but that does have a normalizing effect on the radical cast adjustment. The only townsperson we really get to know is Bennett’s character, who in another nice change, is a warrior, not wilting willow.

As to be expected of a studio action flick these days, there is a violent set-piece constantly around the corner, with bloodshed and body count always on the rise. When — spoiler alert, if you haven’t seen Seven Samurai or Sturges’s film — some of the seven die, it doesn’t hit particularly hard, because we barely know them. I generally don’t care too much about backstory, but I’d like to know something about title characters.

And yet, given the prevalence of white savior stories even today — see the dust up with Matt Damon in China — and whitewashed casts, this Magnificent Seven, even with semi-anonymous characters, is an impressive accomplishment, especially given its restrictive setting.