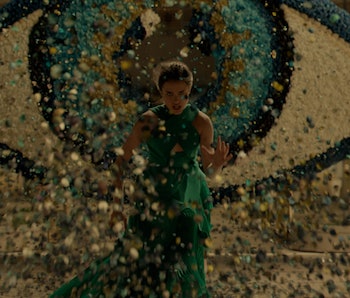 With sizzle reels and international visual effects conferences around the world, you’d think nothing put up on screen would have the power to surprise us. But luckily, every so often, along comes a new project that wows everybody and truly leaves us wondering, “How did they do that?” In this case, it’s the mirror sequence — that somehow leaves out a reflection of the camera crew — in the new three-minute-plus KENZO World perfume spot directed by Oscar-winning filmmaker Spike Jonze.

In the ad, model and actress Margaret Qualley demonstrates some very unique dance moves as she abandons a black-tie event for a lot more on her own fun, complete with laser beams and jumping through an entire KENZO eye.

Inverse spoke exclusively to visual effects supervisor Janelle Croshaw from Digital Domain about how the VFX studio helped Jonze pull it all off.

Can you break down how the mirror scene was filmed, and what steps were involved in removing any cameras and crew reflections?

When Spike first told me about the cleanup for the infinity mirror shot he showed me a recorded previz take with Ryan Heffington shot on his iPhone. I thought OK, this won’t be so bad, assuming it was a handheld shot. It wasn’t until rehearsal that Hoyte van Hoytema, the DP, explained the Technocrane move he had planned. I spent a fair amount of time trying to convince Hoyte to shoot a handheld shot to eliminate the need for so much cleanup in the infinity mirrors. My argument was futile. The smooth and effortless move he desired was only achievable with the Technocrane. In the end the Technocrane move was well worth it. It was a thing of beauty to watch that massive piece of equipment slink in and out of such a beautiful and fragile setting around the actress.

Doron Kipper and Jesse James Chisolm (from Digital Domain) spent hours surveying the mirrored staircase. They used tiny pieces of tape on the mirrors to capture the points needed. Lots and lots of panoramas and high dynamic range images (HDRIs) were taken. During the shoot a clean plate was captured with the Technocrane without Margaret and then the Technocrane was cleared out and a clean plate was captured with a handheld cam. Spike and team were super cooperative in clearing the frame for as long as we needed which was very cool considering those mirrors pretty much reflected two whole floors of the Dorothy Chandler theater.

All of the data collected enabled us to build an environment in compositing software Nuke and also achieve a camera track usable for projections (where the live action footage is ‘projected’ onto a CG version of the environment to enable camera movement). The tracking geometry was mirrored to represent the reflections in the mirror and that mirrored geometry was used to muscle through the matchmove. It wasn’t easy and Jim Moorhead, our matchmove artist, put so much care in to this shot. In the end there was a lot of hand painted clean-up and the shot was split amongst two companies and multiple artists. Artist Rob Fitzsimmons became the keeper of the shot, managing the paint patches and ensuring the quality level was kept to the highest standards. His perfectionism and strong eye made the shot as seamless as it is.

The laser beams are incredibly comical, but how were they and their destruction effects achieved?

The laser hallway was incredibly fun to make come to life. Because of the delicacy in that hallway at the Dorothy Chandler theater, we weren’t allowed to move any of the antiques or furniture which meant practical FX weren’t possible. The shot was a bear to matchmove because it was shot on a moving camera, zooming, with a double extender on the lens. Spike wanted the lasers to be effortless, elegant and powerful. The destruction was mostly done in Houdini (effects software) with a bit of matte paint help and ultimately composited in Nuke. It was a fine line to create a look that matched the power of Margaret’s movements and the sound cues but also didn’t overtake the frame drawing attention away from her. It was important to Spike that the FX weren’t overdone. Our FX team did a great job making that happen.

How was that final jump through the eye realized, especially the implementation of debris?

When Margaret does her ninja fly through the Kenzo eye at the end of the film it’s the finale to her epic dance journey. Spike and KK Barrett, the production designer, wanted it to be as much in camera as possible. Our original plan was for rig removal only with the confetti, breakage, and environment captured in camera. Margaret was on a harness rig hanging by a massive truss that catapulted her through the air in one smooth move. Once again she blew everyone away with her athleticism and stamina. It was again four in the morning. It was as freezing as it gets in LA and all of the crew were in big jackets and beanies and here’s Margaret in her dress doing take after take.

The first practical element to be scrapped was the confetti. It turns out the cleanup would take far too long and daylight was fast approaching. There was also a fountain in the plaza that was covered up to be able to achieve the shot and there was concern that the confetti would clog the fountain. Luckily there had been a lot of filmed rehearsals of the confetti leading up to the shoot so we had tons of great reference for what Spike liked.

Next we realized the environment would need to be recreated to be minimal and clean. The camera moves desired left the truss in frame, compositionally the shots needed the buildings in the background modified, a massive Christmas tree needed to be removed from the plaza and last minute Spike made the call to raise the eye making the need for the ground to be recreated. Originally the eye was sitting on the ground but it made the jump less dramatic. Raising the eye gave the whole frame room to breath giving Margaret the hang time Spike was after. In the end artist Benjamin Nowak did an amazing job recreating the entire environment with painted projections.

The last item to go away on set (or so I thought at the time) was Margaret actually breaking through the eye. It was taking too long to reset the practical eye breakage and KK wanted to see more pieces broken so we decided it would be added and enhanced in CG. It would also make our life easier not having to do any rig removal inside of the practical breakage. As is often the case with our luck in VFX, during the edit phase Spike and EZ, the editor, fell in love with one of the original takes. It was easy to see why. When Margaret was actually breaking through the eye it had such a raw, gritty feeling to it. Spike really didn’t want it artificial in any way, especially her performance. This is where our CG supervisor, Brian Gazdik and his team, took over. We kept 100 percent of Margaret’s performance but had to modify and recreate all of the breakage, confetti and eye around her to give it the explosive energy Spike was after.

Any other effects in there that people might not realize Digital Domain was responsible for?

The main effects were the laser room, infinity mirror and jump through the eye but we also did a handful of clean up jobs and even recreated the tapestry behind Margaret when her arms and legs are trying to get away from her.

Can you talk about the kinds of conversations you had with the director about how the VFX should be integrated into the spot?

It’s always a very collaborative effort with Spike. The great thing about Spike and his teams is they do not take VFX for granted. There is always discussion and consideration for the tight budgets and more importantly that the FX look seamless and photo-real in the end. On a Spike job very rarely do you hear “fix it in post.” He is great about explaining exactly what he wants but then trusting the process allowing the time and versions needed to achieve the look he’s after. There is always a lighthearted tone to our conversations that keeps it fun eliminating unnecessary stress. His low key demeanor mixed with his great style make it a pleasure working on his jobs. He brings out the best in all those around him and that’s something I try to learn from. I think the VFX artists love working on Spike jobs for all these reasons. Ultimately we are artists and to have fun creating art knowing the end product will be unique, entertaining and look amazing…that’s what it’s all about.