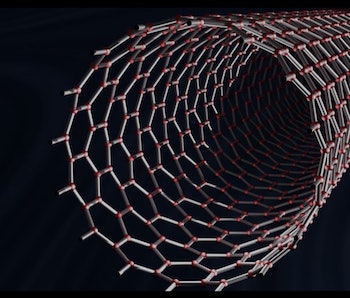 Researchers at the University of Wisconsin-Madison may have just unlocked the biggest development in nanotechnology in more than two decades, and naturally, it’s going to affect your smartphone.

Wait, but what are carbon nanotubes? Simply, they’re cylinders made entirely of carbon atoms. They have the highest strength-to-weight ratio of any known material which, in combination with their flexible and spring-like structure, makes them a coveted alternative to the silicon used in most computer transistors. First discovered in 1991, the small structures pack a punch, with an ounce-for-ounce strength that is 117 times stronger than steel.

While they’re largely discussed in terms of commercial potential, researchers at NASA have experimented with using carbon nanotubes to build lighter space aircraft and researchers report potential in military and industrial use as well. Other research has shown carbon nanotube-based screens to be nearly 100 times more resistant than ITO (indium tin oxide) touch-screens.

In 2014, IBM reported that they were developing CNT chips that would be ready for commercial use by 2020. However, Wilfried Haensch, who leads IBM nanotube research, reported at the time that the company was still struggling to figure out how to shrink the oxide of the battery without the battery leaking.

There’s no debate that carbon nanotube transistors are theoretically much faster than silicon transistors, but up until recently, removing the impurities in them also presented a challenge to researchers. When carbon nanotubes are grown, only two-thirds develop into the semiconducting variety needed for transistors. Arnold’s lab was able to create conditions where nearly 99.9 percent of the tubes were semiconducting.

Improvements in carbon nanotube technology have been rapid in the past few years, but challenges over how to actually utilize the technology persist.

“There’s more to figure out,” Arnold tells Inverse. “We’ve made transistors now that are more conductive than silicon transitions but one of the next steps is making it a more uniform process. How productive the channel of each transistor is may vary between transistors.”

So far they’ve only tested the improved transistors on an “inch by inch scale”, hardly enough to determine if they’re ready to use in a CPU that could take 100s of transistors to operate.

Arnold tells Inverse that 2020 may be “a very aggressive timeline,” for a full-fledged nanotube computer, but the using the technology on a smaller scale could have a more immediate impact.

Because nanotubes are so flexible, they also offer a promising alternative to silicon for the future of wearable electronics.

“Another really promising application is in making very high-speed radio frequency amplifiers for cellular communications and wireless communications,” say Arnold, whose lab will be focusing next on using carbon nanotubes in communications technology.