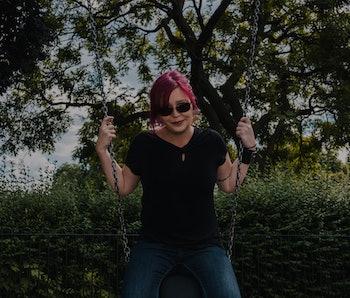 This week, we spoke with fantasy and cyberpunk author Emma Trevayne. Her latest book Gamescape: Overworld is the beginning of a new series that imagines a future in which a virtual reality video game holds up the plummeting global economy.

What inspired you to write this story?

There were a lot of different influences I pulled together. Probably the biggest one is just that I grew up being influenced by William Gibson at an early age. I’ve always enjoyed reading and writing that kind of thing. But the biggest concrete influence is the thing about the mechanical or the biomechanical body parts. I have one. I have a machine in my head, and so I’m always really intrigued by the idea of the way humanity is progressing and becoming more bionic, because I had to have surgery done and now I set off metal detectors. I’ve worked that into a lot of different books, but I was really waiting for an opportunity to really work it in heavily.

What part of you is bionic?

I have a thing called an occipital nerve stimulator which stops me from having a headache all the time. It’s essentially like I have a battery just beneath my collarbone. From that battery, wires go around to the back of my neck and vibrate against a nerve at the back of my head. It interrupts the pain impulse. I come with a remote control — I can control it like with a remote and turn the vibration level up and down. And I have to charge it every month with a thing called a wireless induction battery. So I place a sensor over the battery that’s in me and it charges up by sort of sitting over it.

Do you think that the key to good cyberpunk is to ground it in reality?

I think the key to good cyberpunk is the same as the key to any science fiction, which is that if certain things — and I’m particularly thinking of emotions — are authentic, you can get away with a lot of other things. Obviously there are going to be situations and inventions and technologies that we can’t entirely relate to, but guilt and happiness are the same. So as long as you make the emotions authentic, you can stretch science fiction quite far. That’s the same in cyberpunk.

Have you read any sci-fi or cyberpunk books lately that you’ve particularly enjoyed?

I’ve been on a more steampunk-y kick recently. I managed to find a signed copy of Infernal Devices by K. W. Jeter in a book store I stayed up all night re-reading it. I didn’t get any work done the next day, even though it was like the fourth time I’d read it. And I recently re-read Eon by Greg Bear.

In your own work, what do you find is the most challenging part of writing about the future?

Trying to figure out what parts of society we would have left behind and what parts we would keep. When you’re writing about something a hundred years in the future you have to look at the way our world today is different from the way it was a hundred years ago: How much more freedoms we have in a lot of ways and how we have less freedoms in a lot of ways. That that’s probably the hardest part, like, “Would politics still be the same? Would our attitudes to the gay and lesbian community still be the same? Do we shop for food in the same way?” All these normal, everyday things — it’s trying to figure out which of those we think, “We’ll just keep them the way they are,” and which things we would change. Obviously there’s a lot of creative freedom there but I one of the challenges is that you have to come up with a realistic timeline and bring it to that logical conclusion.

Since sci-fi has become more popular in recent years, what excites you most about the genre becoming more prominent in the mainstream?

What’s most exciting about it is also the reason why it’s happening. I think we’re a lot more aware now of our futurism — we’re a lot more immediately surrounded by technology than we were 20 or 30 or 40 years ago. When my parents were my age, there were only just starting to be computers in homes and now everybody has an iPhone in their pocket. And that, I think, puts us more in that frame of mind where we’re more aware of what the possibilities are and therefore interested in seeing in fiction how far we can stretch those.

That really excites me because there are a lot of instances of things getting written about in books that are then invented. I’ll use a personal example — and it is not a case of cause and effect; I know they invented them completely separately from me writing a book about them — but my very first book was about music being used as an auditory drug. People listened to music that altered their brainwaves to make them high. And about a year ago — maybe a little less — a company in Florida released a pair of headphones that can do this. You can get high listening to your iPhone through these headphones. I think I’d be scared to try them, but I like the fact that you can read about something in a book and go, “Wait a minute, maybe that is actually possible.” We are pushing ourselves because of things we’re reading about that was originally just somebody trying to make a story better. The way that fiction can influence reality is amazing.