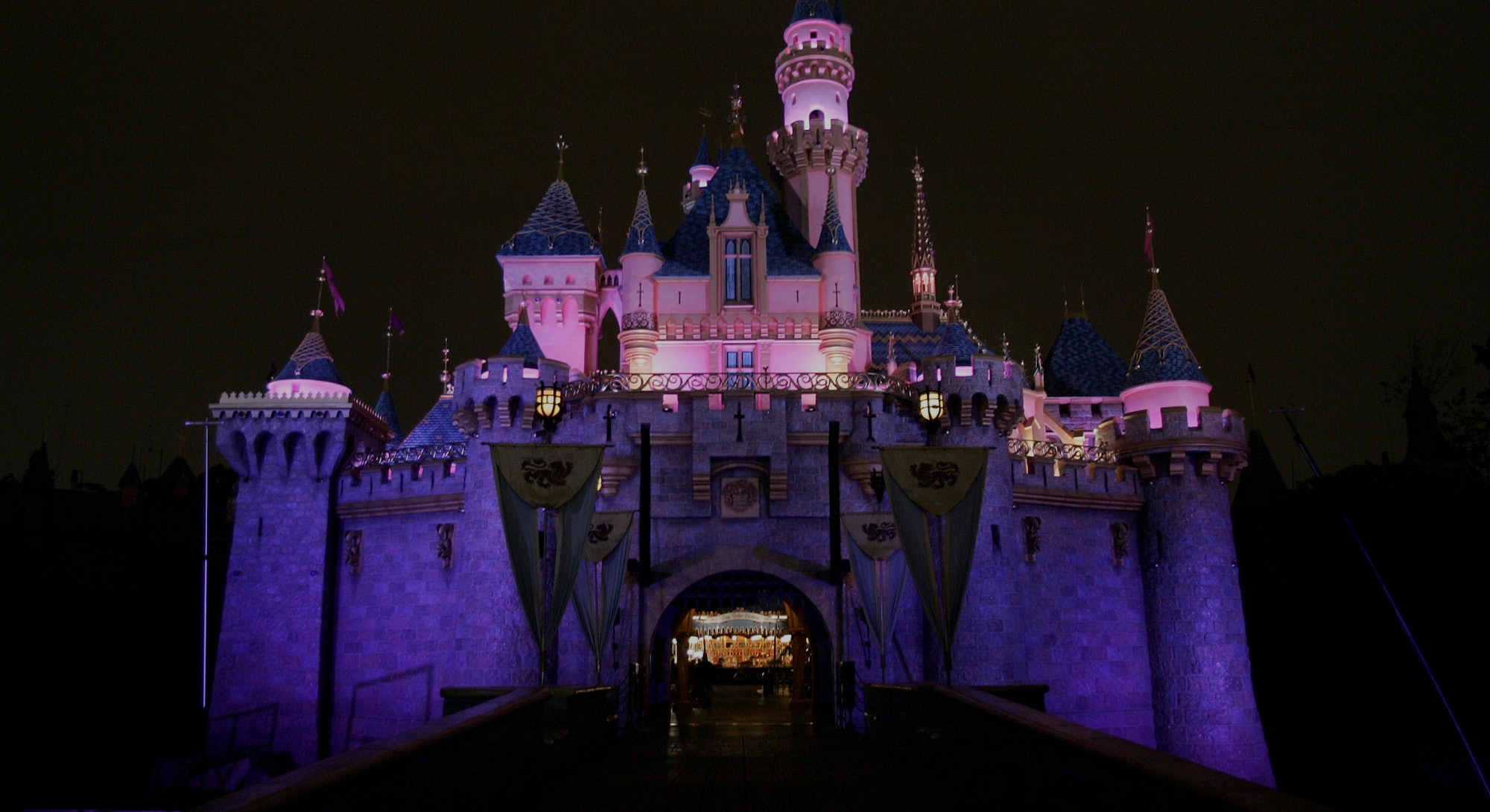 A lifelong Disney fan, Heimbuch was always captivated by the company’s long history of technological innovation, both in animation and engineering. By his mid-20s, his fascination with the behind-the-scenes construction of the Magic Kingdom’s many rides and robots had become a career, as he ran podcasts and websites about the $170-billion, Burbank-based media conglomerate. Eventually, he became so deeply ingrained in the word of Disney that he even co-authored It’s Kind of a Cute Story, the autobiography of early “Imagineer” and Disney Legend Rolly Crump.

When he was out in L.A. to promote the book in 2013, Heimbuch and his now-fiancé Martina were offered jobs as Disneyland tour guides by an independent company. The offer gave him the opportunity to make the move out west from New Jersey, which he had long contemplated.

He took the gig, but it wasn’t long until he regretted signing up.

“Around that time, the stories came out about people who would pay to have others get them handicap passes to go to the front of the line. That’s essentially what the woman who was in charge of the company was doing,” Heimbuch, now 32, recalls ruefully. “I was like, ‘Whoa, this is not cool. You can’t do this.’ I trained with her twice and was very uncomfortable, I did it once by myself, and afterward I told Martina I just can’t do this anymore.”

He quit the job and, over time, has became disenchanted with Disney itself.

“Some of the people who are really into this stuff are just the worst human beings imaginable,” he laments, careful to note that he has made some long-lasting friendships in the group, nonetheless. “They’re the keyboard crusaders. They post terrible stuff about people with no repercussions. Some are just like that in real life, they’re just not nice people. They feel entitled and they want what they want and that’s it.”

What do those “keyboard crusaders” want? Mostly, the Disneyland of their childhoods, which is an impossible request. Both Disney World and Disneyland are currently undergoing their biggest expansions yet, infusing Star Wars, the company’s shiny new franchise, into the hallowed, revered grounds. This has not sat well with some of the more intense fans, some of whom have registered historical objections to the slight movement of a fake river, or that “rides are going to be closed for some amount of time,” Heimbuch says, exasperated at the nitpicking.

Still, the community of Disneyphiles living in the shadow of Splash Mountain is growing, as transplants flock to the greater Anaheim and Orlando metropolitan areas. Naturally, eyebrows are raised when adults more to be closer to theme parks. But affinity to a multinational corporation that traffics in childhood memories makes its own kind of sense, and quality of life is a personal thing.

But, as Heimbuch’s story suggests, Disney fans all have their own version of what Disney is. All of those personal versions can coexist in theory, but the real future of Disney is determined not by pure sentimentality, but by its board members and executives.

For a company that is best known for producing cartoons and roller coasters, Disney often triggers incredibly complicated feelings and reactions, especially in its most devoted fans. Disney does its best to cater to these fans - its special D23 fan club grows every year, with events across the nation - but it is also in the business of progress, and change.

While Disney emphasizes and commoditizes nostalgia, both in its films and vast merchandising empire, its predominant focus right now is global expansion. To inject Star Wars into its theme parks, Disney is rearranging both Disneyland and Disney World in unprecedented ways. Most significantly, the company partnered with the Chinese government — and surrendered an unprecedented level of control — to open its $5.5 billion Shanghai Disneyland Resort. It’s filled with shiny new rides and hotel concepts, an entreaty to the market that the company needs most as it looks toward the future.

For American Disney fans, the focus is often on the past — Disney’s movies and theme parks are so often intimately tied to people’s important moments and memories.

“The links to childhood, as well as to family, have to be considered a major explanation for the widespread and on-going loyalty that Disney attracts,” says Janet Wasko, the author of Understanding Disney: The Manufacture of Fantasy and the Knight Chair for Communication Research at the University of Oregon. “The company strongly emphasizes this notion of “memory” and “commemoration” to reinforce these connections. The idea of ‘Disney memories’ is especially strong at the theme parks, but also connected to promotions of other products.

As such, fans’ personal evolutions often dictate how they will react to the constant changes to the corporate properties.

For Thomas Valley, specific changes to Disney World have never been particularly relevant; it’s what the place represents to him that inspired his move back to Central Florida in 2014. Valley grew up in the ‘70s near West Palm Beach, a three hour drive from Orlando. His dad, who worked at the local nuclear power plant, grew up a big Disney fan, which meant weekly pilgrimages to the Magic Kingdom with his children. It was their special place. “I knew every ride by heart,” Valley recalls fondly.

Then, his parents got divorced, a difficult episode that tainted those weekend outings to Disney World. “I was very angry with him for many years, and rejected everything for which he stood, Valley explains. “I disdained Disney World, and didn’t even consider going to the parks again until 1999.”

When he finally returned, it was a revelation.

“That first day, walking into Magic Kingdom, out from underneath the train tunnel, I dropped years off of my age, and the nine-year-old that gave up on his dad those many decades ago reached up and took his hand,” Valley remembers. “I got the chance to reach down and take my son’s hand, and I was lost to the parks ever since.”

Passing down and sharing the experience is a large part of Disney Parks allure.

“It’s definitely unique, but I think the fact that they have a place to move near makes the phenomenon seem more pronounced,” David Zanolla, a professor who teaches a course on Disney and communication at Western Illinois University, told Inverse. “For example, fans of Star Trek don’t have something to move near. Same with Lord of the Rings. Even fans of professional sports teams only have the chance to see their team at home during half of the season.”

Put a different way, it’s not unusual that Valley mourned the loss of his father by visiting Disney World. It’s unusual that Disney facilitated that experience.

“It’s not just the link to people’s childhoods, but the fact that people can immerse themselves in a four dimensional version of the films from their childhood,” Zanolla says. “I also have to believe it’s generational. If you went as a child, a visit to a Disney park is the thing you want to do with your children. So, in that sense, generational brand-loyalty is achieved.”

Heimbuch rarely ever visits Disneyland now; he had to be convinced to renew his annual pass by his wife, and really only uses it when friends visit or he has an event to attend. That he’s had some difficulties working with the company on further installments of the Crump book hasn’t helped matters, but it’s the community surrounding the parks that has done the most to sour him (the social conservatism of many fans has also caused conflicts, especially when he expresses his excitement over new episodes of Rupaul’s Drag Race).

He’s still happy he made the move — Heimbuch is an optimistic and creative guy whose career is flourishing in LA. But for now, Disneyland for him is no longer The Happiest Place on Earth.

“There is an interesting relation between fans’ interests and the company’s needs, Wasko says. “Often, they coincide, meaning the company responds to specific fan/audience requests/interests. However, I don’t think it’s too extreme to say that the company will make decisions based on their need to be profitable.”

Valley and Heimbuch’s experiences point to the many different reasons that Disney fans flock to live near the parks. It can be a personal pilgrimage, or an attempt to find community. There is no corporation that is so deeply and uniquely ingrained into the lives of so many generations of people; with such a sprawling library of films, TV shows, theme parks, and other properties, the company has played a different kind of role in the development of virtually every single one of its fans.

For Josh Taylor, a devotion that began with childhood vacations to Disneyland and wearing out VHS tapes became something far deeper as the years progressed. Disney has provided the 31 year old both heart and home — he met his wife Angie while writing for a Disney podcast, and they make rent by operating a Disney crafts Etsy store, the Modern Mouse Boutique. Angie makes mouse ear headbands and Josh advertises them on his current podcast, Modern Mouse Radio.

It’s a magical relationship, but there’s one glaring problem: the Taylors live outside Denver, which is just over a thousand miles from Disneyland. So, this winter, they will be packing up and moving to Anaheim.

“We went to the D23 Expo last year, and that was the solidifying event for us,” Taylor says. “We made so many friends, met so many people. For us, it was like, these are the people and the places we want to hang out at, so let’s just make the move.”

Taylor isn’t all that concerned about the potential pitfalls of integrating himself into such an intense community.

“We have quite a few people that we’d say are friends, or even good friends, that we’ll be hanging out with quite often,” Taylor says, excited about a social life filled with people who have already made the same big move. They’ve already got Disney fan roommates, and have no qualms about relocating; Angie moved from Cape Cod to Colorado and moved in with Josh a few months after they met online. Thus far, aligning their lives around Disney has only resulted in reaching new levels of happiness.

Disney has spent the last decade pouring billions into expansions of its brand, from the purchasing of Marvel, Lucasfilm, and Pixar, to its efforts in China. Rides are being replaced — the iconic Tower of Terror is receiving a Marvel-infused facelift — and new attractions are being developed for other markets. Zanolla even suggests that American fans may “start clamoring for some of the Shanghai rides to make their way over here,” as they begin to read reports of the shiny new attractions overseas. It’s a small world, sure, but China is still a long ways away.

And yet, the heart — and most loyal customers — of the company still remains in America, and those fans fascinated by the world’s most dynamic media conglomerate’s development are in for what should be a captivating next decade. Disney, more than any other corporation or brand, is a living and breathing organism, with a distinct personality. Keeping up with its growth is essential for In both age and involvement in the online Disney community, the Taylors’ profile more like Heimbuch than Valley. And yet, there’s every chance they’ll be incredibly satisfied with their move — so long as they can get on board with Disney’s endless progress. Even in The Happiest Place on Earth, you have to be happy with yourself.