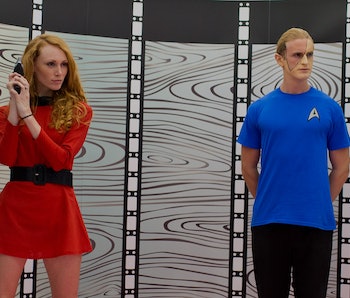 Star Trek cosplayers are going to have to update their wardrobes very soon. Bryan Fuller revealed some major details about Star Trek: Discovery this week, and mentioned that the Starfleet crew members will be wearing “something completely different,” from previous looks.

Despite having origins during the same era as “The Cage”, the costumes won’t necessarily look like they’re straight out of 1965.

Thinking about new Starfleet uniforms is a big deal — the show’s entire aesthetic is just as iconic as it’s famous quotes and characters. The original costumes designed by William Ware Theiss certainly set the tone for the famous “pajamas in space” look. For the 50 years since then, Star Trek has headed in more militaristic directions in the feature films, relaxed jumpsuits on some of the ‘90s shows, and back to ‘60s color-coded nostalgia for the rebooted movies. For being such a disciplined organization, Starfleet sure does change its mind a lot about what everyone should wear.

Obviously, from a real-world perspective, changing the fashion of what the characters are wearing helps keep each iteration of Trek fresh. But, it seems like Fuller and company will have some continuity acrobatics to figure out in terms of what these uniforms are supposed to look like. Because the new series takes place ten years before the original series, that also puts it about ten years after the era of Kirk’s father, George Kirk. With that in mind, maybe we’ll see Starfleet uniforms that look like a cross between the minimalist uniforms we saw at the beginning of 2009’s Star Trek reboot and the high-collared velour get-ups from “The Cage.” This idea would probably support Fuller’s statement that the uniforms are “a little bit of this and a little bit of that.”

No one loves nitpicking “historical” accuracies more than Star Trek fans, but they also love dressing up in the iconic costumes, too. Fuller commented on this phenomenon, saying one of the other writers of Star Trek: Discovery believes that cosplayers are going to “rise to the occasion.”

More like this
Entertainment
Jan. 30, 2023
Doctor Who Could Become the New Marvel — But There's a Catch
By Ryan Britt
Culture
Feb. 2, 2023
Buck Rogers in the 25th Century’s Most Baffling Change Also Gave Us Its Best Character
By Ryan Britt
Culture
Jan. 25, 2023
30 years later, Star Trek is about to pay off a massive villain comeback
By Ryan Britt
LEARN SOMETHING NEW EVERY DAY.
Related Tags
Share: