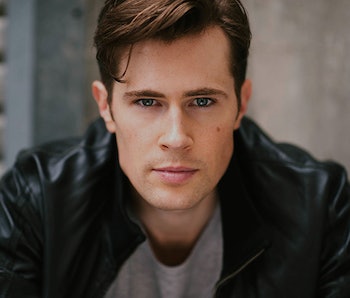 Time-travel historical drama Outlander has announced its casting of the pivotal role of Lord John Grey: Australian actor David Berry. And, believe it or not, he’s perfect. If you haven’t heard of him, that’s okay — Berry only has five acting credits to his name thus far, most recently on the Australian drama A Place to Call Home. But, nobody had heard of Sam Heughan or Caitriona Balfe before they were cast on Outlander, and that turned out more than fine.

For those who haven’t read Diana Gabaldon’s popular books, you’ve actually already met Lord John Grey when he made a brief cameo in Season 2, but played by a younger actor. In the books, he’s an idealistic British soldier whose future becomes entangled with Jamie and Claire’s. As Season 3 will pick up with an older Jamie and Claire, Lord John Grey naturally needed a new, older actor.

“He’s also a gay man, in a time when to be homosexual was a capital offense,” author Diana Gabaldon has said, about the character. “And Lord John has more than most to lose by discovery. He belongs to a noble family, he’s an officer in His Majesty’s Army, and loves both his family and his regiment; to have his private life discovered would damage—if not destroy—both.”

Minor spoiler alert, he obviously develops feelings for Jamie. In that light, their Season 2 scene is an odd sort of meet-cute.

Starz has described Grey as, “Boyishly handsome with an upper class rearing the consummate gentleman. However, a scandal from his past has relegated Lord John to an undesirable position as governor of a desolate prison in Northern Scotland.”

Lord Grey begins as a minor character but Diana Gabaldon has given him his own spinoff series, which consists of novels, novellas, and short stories. Suffice it to say he will be a character to watch out for on the show, and David Berry certainly fits his description from the books.

There is no word yet on exactly when Outlander will return for Season 3, but it will most likely be later in 2017 on Starz.