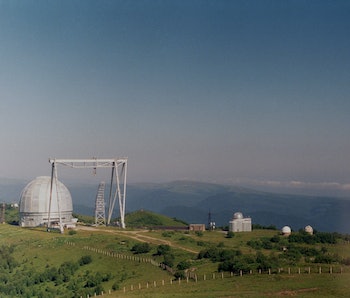 Russian astronomers at the Special Astrophysical Observatory in the Caucasus Mountains say they have detected an intriguing signal coming from the direction of a star located about 95 light-years away. While the signal is, in all probability, an entirely natural phenomenon, it’s unusual enough that the astronomers are calling on SETI — short for the Search for Extraterrestrial Intelligence, which should give you some sense of where this is going — to monitor the signal going forward.

Centauri Dreams has a great, detailed overview of what’s going on with the signal, which is coming from the direction of star HD164595. The star itself is interesting — at least from our biased human perspective — in that it’s damn near identical to our star: It weighs in at 0.99 solar mass, its average temperature is just 12 Kelvin hotter than the Sun, and it’s only 100 million years younger than our sun, which is practically nothing when talking about solar lifespans. It does only have one known planet, a Neptune-sized gas giant in a close, 40-day orbit. It’s certainly possible there are other planets we haven’t detected yet, though.

There are three basic explanations for what’s going on here. The first and easily the most likely possibility is that there’s some noise in the data that has created a phantom signal. The second possibility is that the signal is real but entirely natural, which could reveal something interesting and unexpected about the universe. The third possibility, the one that nobody is seriously entertaining but is still worth doing due diligence on, is that the signal is real and the work of an alien civilization living in that star system. All three of those are worthwhile results that would add to our sum total of knowledge. Of course, only the last one would change our world forever, so it does tend to get the most attention.

The astronomers have determined enough about the power of the signal to say that, if it is the work of aliens, then we’re dealing with a civilization considerably more advanced than our own. If this theoretical beacon is broadcasting in all directions, then its creators would need to be able to harness the entire energy output of their star. But if the beacon is specifically directed at our solar system, then the civilization would only need the energy of their entire planet. (To get technical about this, we’re talking about the difference between a society that’s Type II or Type I on the Kardashev scale — humans are still squarely a Type 0.) Of course, if the beacon is pointed at us, it’s a hell of a coincidence, considering a star 95 light-years away would only have picked up humanity’s very first radio waves in the last decade or so, making any timely reply impossible for nearly another century.

Again, though, as fun as all that is to consider, there’s no reason to think we’re dealing with actual aliens. But there is reason to think there’s something unusual in this signal, and that’s precisely what SETI exists to investigate. This signal is probably nothing, as are pretty much all the other candidate signals astronomers have come across since we started looking, but the best way to find something this unlikely is to be willing to look through lots and lots of nothing until you finally find what you’re looking for.

More like this
Science
Sep. 15, 2022
Wow! Astronomers have an intriguing hypothesis for a decades-old extraterrestrial mystery
By Kiona Smith
Science
Sep. 11, 2022
Astronomers find a shocking culprit that shaped Earth's continents
By Charles Q. Choi
Science
5 hours ago
20 years ago, astronomers rediscovered the first exoplanet ever found
By Allie Hutchison
Share: