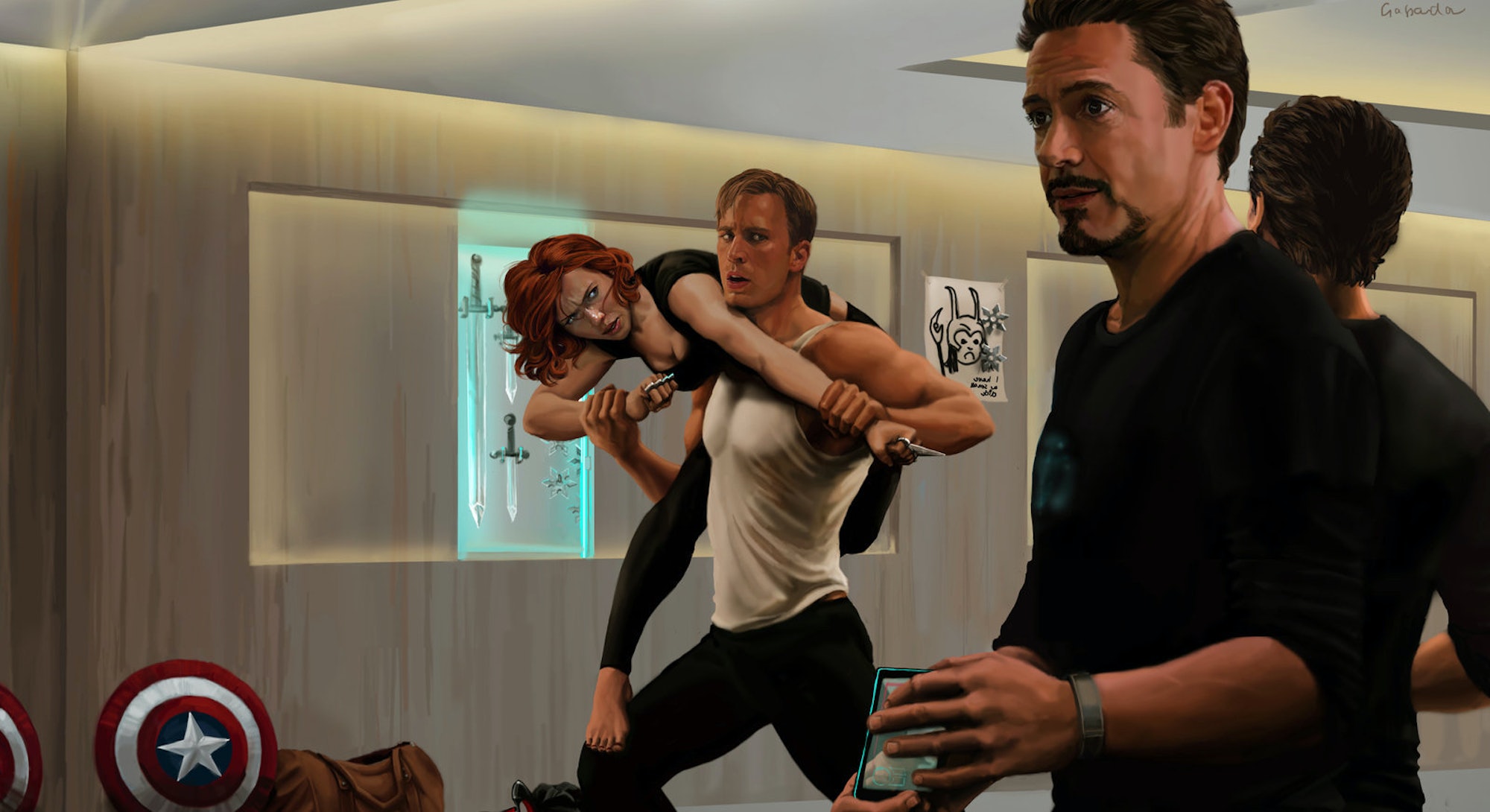 There are over 22,000 fandoms represented by fan fiction on Archive of Our Own. In total, there are more than 2-million works on the site, and on average, the archive gets somewhere in the neighborhood of 15-million page views per day. Created and operated by the Organization for Transformative Works (OTW), Archive of Our Own (AO3) is one of the largest online archives for fanworks (most of the works qualify as fan fiction).

Some fandoms, like Harry Potter and Marvel, are huge, with works numbering in the hundreds of thousands. But the big fandoms only scratch the surface of what’s on AO3. From Dungeons & Dragons to Labyrinth, there’s fandom and fanfic for just about everything.

The website is far from the only online home of fanworks, though. On thousands of sites and through dozens of mediums, millions of fans create fanworks which correct, supplement, or otherwise remix content from books and comics to TV shows and web series.

“Fanworks are a huge part of what holds fandom together,” says fanwork creator “here’s luck” (the pseudonym under which she creates and shares fan videos). “When a show has a big fandom, the show is just the center of gravity for a huge, beautiful, complicated constellation of activities.”

Very often, fans come into fanwork because they’re not finding what they’re looking for, either from the show itself or from existing fan works.

“I wasn’t finding videos set to music that I liked, or music I thought the characters would like,” says “heres luck”. “I thought, ‘Well, if I want to see those videos, I guess I’m just going to have to make them myself…[I]t’s totally an offshoot of punk/DIY culture in that way.”

A history of fan creators

We have a tendency to talk about fandom and fanworks as if they’re new, but as Henry Jenkins points out in his 2006 book Culture Convergence, fanworks are part of a history of participatory culture, harkening back to a time before mass media gave us stories to consume.

“When you deeply identify with a character or a narrative,” says [Tea Fougner, a fanwork creator and co-editor of RAW: A Hannibal/Will Fanthology, “exploring it is second nature I think we often forget this today in the world of corporate IP, but for millennia, stories were a collaboration across generations: oral tradition and the scarcity of literacy or written texts meant that sharing stories by necessity meant retelling them to a degree, and building on top of the creative work of those who came before, whether it was embellishing their stories, or creating more stories about the same characters, or commenting critically on the original work by creating new stories, were all extremely common activities. It’s how we get things like the Argonautica, or Paradise Lost, or many of Shakespeare’s plays.”

Is writing about someone else’s creation a waste of energy?

Why do fans create original work within someone else’s universe? After all, some fan fiction is easily novel-length, or longer. And every video someone uploads takes hours of work. What compels creators to design new works as part of an existing brand, and to contribute their talent and effort for free?

The motivation is different for everyone, but what many creators have in common is the desire to shape their preferred narratives.

“I think that fandom often points to gaps in what popular media is presenting, says Fougner. “So much fanwork is created by people and for people who aren’t seeing the kinds of stories they want to read being produced on a larger scale. There’s a great deal of fanwork that is specifically about queer identities, or about characters of color, for example, because fans who want to read about characters like that are feeling let down by pop media.” As “here’s luck” pointed out: If you want something and you aren’t, for whatever reason, getting it, you might have to make it yourself.

“I identify as queer, and there’s just not a lot of mass culture that’s made for me and my tastes,” says “here’s luck”. “More than there used to be, but still. I spend a lot of time strategically ignoring the elements of shows and movies that I’m just not that interested in and focusing on the stuff that I am interested in. Whereas in fandom, I can usually find people who are making exactly what I’m interested in, and thats just so restful compared to my usual experience.”

OTW staffer Claudia Rebazas findings from her studies in fandom and work with OTW back “heres luck” up.

“There is a sizable quantity of fanworks that revolve around LGBT characters or which deal with gender issues,” says Rebaza. “This is apparent just by looking at the tag sets at AO3.”

Canon and non-canon LGBTQ characters from Bisexual Peggy Carter to Trans Sirius Black, a wide range of identities and experiences belong on AO3 and give fans a way to find narratives that give them what mainstream media can’t (or won’t).

What happens when fan fiction becomes more popular than a source text?

Things start to get really interesting when fanworks get very popular within fandoms (which happens often), and those fan-produced fictions inspire other creators to build upon that work, transforming it in an entirely new way.

“The most energizing thing is seeing how people collaborate,” says Rebaza, “either taking an idea and spinning it out with more and more people adding their insights, or in inspiring one another to create new work. People have written fic about fan art or created art or videos about stories, written analysis of fanworks — it’s just a chain of inspiration that doesn’t end.

Rebaza emphasizes the key role of fanworks in understanding not only cultural content, but the context in which it exists. The things that people are passionate about survive. They are passed on to other people, sometimes across centuries, or they may be of relevance only to a particular generation, but still serve as a touchstone during that lifetime. Fan engagement is important in the preservation of cultural history. And it’s also often the case that those canons and the fan activities surrounding them speak to larger truths and common knowledge during that time period.”

For example, the Star Trek fandom is often regarded as the originator of slash fiction (works with same-sex relationships) long before slash pairings like Kirk/Spock were portrayed on television. In many ways, Star Trek’s “Space Husbands” are a big part of the cultural movement that ushered in fandom as many understand it today.

Despite the many misconceptions that may exist around fanworks and fandom, they’re inextricable parts of a wider cultural conversation that keeps evolving. It’s changing even faster with the introduction of the internet, and that’s where OTW comes in.

Part of OTW’s mission is “providing access to and preserving the history of fanworks and fan culture in its myriad forms,” and to that end, OTW operates not just AO3, but a number of projects that seek to promote and protect fan-made activities and creations. While fanworks are sometimes written off by those who don’t consume them or belong to the communities from which they spring, fan creations are a vital part of not only fandom, but of culture as a whole.

OTW’s efforts are leveled at ensuring that the history and importance of fan culture is as accessible as possible. The group has a number of projects that extend far beyond AO3, like Transformative Works and Cultures, a peer-reviewed academic journal that focuses on a scholarly understanding of fanworks and activities; Fanlore, a wiki that preserves the history of key aspects of fandom, allowing people to trace the roots of fan phrases, practices, and paradigms; Legal Advocacy, which has changed the face of fair use as it pertains to transformative works by advocating for fans and for the importance of these works in legal settings; and Open Doors, a project that protects and preserves at-risk works in partnership with the University of Iowa Libraries’ Special Collections.

Another common thread among many of the manifestations of fandom is community. As humans, the vast majority of us enjoy being around people who love the same things we do. Common ground has always been a powerful part of fandom. “Fandom is not for those people who sat in English class saying ‘…you’re reading too much into this,” says “heres luck”. Indeed, fandom is typically marked by passionate, enthusiastic engagement with a text, with other fans, and with other creators as well.

“[P]art of what I love about fandom is that fans have a long history of not just encouraging each other to make fanworks,” says “here’s luck”, “but building stuff that helps us get those works to the people who want to see them: creating mailing lists and fic archives and recommendation lists and tagging systems and ‘vidding’ conventions so that we can find each other. So we can find that one story or video or whatever that it feels like someone made just for us.”

Many underrepresented fans can attest to the fact that fandom is something of a salve for the sting of a mainstream media that doesn’t include us. To see yourself in work you love is to see yourself as a part of the world, and even when mainstream media won’t give us that luxury, fan creators and fanworks do.

Just as TV is never really “just TV” and films are never “just films”, because of their impact and cultural context, fanwork is never “just fanvids”, “just fanfic, or “just fan art”. These cultural products are a way for fans to invite themselves into the works they love, and to make something richer, more inclusive, and more reflective of humanity’s multitudes. Fandom is a vital act that alters the way we see the world, the way that we interact with popular culture, and that way that we understand ourselves within the context of both.