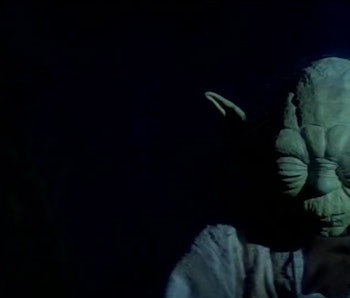 Yoda’s signature “backwards” speech in Star Wars is goofy, but it still gives the character gravitas. Linguist Elaine Espindola can not only confirm this, but also explain why. Her work shows that the Jedi Master’s speech patterns are specific to certain attitudes about one’s place in the universe. Yoda’s syntactic singularity is apparently an outgrowth of the same inner calm that makes him such an effective warrior. Espindola believes that Yoda’s speech is crazy, but crazy like a very kind fox.

“Certain structures arise from Yodas perception, which he brings to the fore by placing the element he wants to emphasize in initial position for specific contextual motivation,” Espindola explained to Inverse. “A simple illustration will do to make this point: ‘Learn, you will,’ says Yoda, when he wants to foreground the Jedi’s learning process. These configurations emerge in Yoda’s spoken discourse and are central to the construal of his identity.”

Essentially, Yoda talks the way he does on purpose to specifically get his points across faster and, presumably, to help his students connect with the Force efficiently. When Yoda says to Luke, “Clear your mind of questions,” this isn’t phrased in his “backwards” speak, but if Espindola is correct, it’s still consistent with his goals. He wants the word “clear” at the fore of whatever his student is thinking. This even happens in confrontations with his enemies: when Yoda rumbles with Palpatine in Revenge of the Sith, he smack-talks the Sith Lord by saying “At an end, your reign is.” Basically, Yoda is saying he’s going to end Palps before talking about anything else.

Through close-readings of both the English and Portuguese subtitles for all of Star Wars, Espindola believes none of this is an accident. All the writers – George Lucas particularly – intended for Yoda to talk this way. But, is there an in-universe reason why Yodas dialect is specific to him?

In the Star Wars films, the only other member of Yoda’s species we ever see is Yaddle, a Jedi serving on the council in The Phantom Menace. Yaddle never speaks in the film, but in several non-canonical comic books published by Dark Horse, Yaddle talks with the same distinct speech patterns as Yoda. So, if we take Yaddle’s speech as proof, then Yoda’s speech patterns might be somewhat cultural. Still, Yaddle was about half Yoda’s age, and trained under him, so maybe she was just biting on his style?

“Yoda is one of the last real old Jedi,” Frank Oz told the BBC in 2011. Oz asserts though the Empire Strikes Back screenplay by Lucas and Kasdan was the kernel for the idea of Yoda-speak, Oz himself was the one that made it what it was. “Not unlike Native Americans…Yoda is trying to keep the culture. The old culture. And that is the way they originally spoke.” Oz said.

In Return of the Jedi, Yoda tells Luke he’s 900 years old. In Empire he says, “for 800 years have I trained Jedi,” emphasizing he’s been talking the Force speak for quite awhile. If a warrior from the 12th century were to somehow survive to the year 2016, and was presumably speaking the same language the entire time, his speech patterns would probably sound odd to us. “The choices made by Yoda do not go beyond the lexico-grammatical choices present in the English system,” Espindola told Inverse, meaning that while Yoda might be speaking the way he does to preserve an older culture, more relevantly, speaking this way isn’t incorrect.

“Yodas discourse can be characterized as a highly marked thematic discourse structure,” Espindola explained. “The character is construed as the Master who disseminates through words - both in English as well as in Portuguese – his timeless wisdom, which is established in all the films.”

Misattributed to Mahatma Gandhi, we’ve all heard that popular bumper-sticker feel good-phrase, “Be the change you want to see in the world.” Accordingly, the Jedi try (and sometimes fail) to be a positive change in the world they inhabit. The path to creating peace and prosperity isn’t always easy or clear in Star Wars, though inherent to the idea of the Force is the notion that every person’s positive or negative attitudes can and do create real impacts on everyone’s lives.

“[Yoda’s speech style] has features which serve to mediate the world-view of the central character,” Espindola said. Meaning, for Yoda, talking the talk of a positive, mindful person is actually the same as walking the walk.