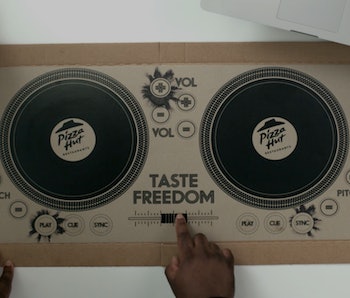 If you’ve ever looked at an open, greasy pizza box and thought “you know what, I think I want to make music with that,” Pizza Hut has you covered.

The UK branch of Pizza Hut debuted a pizza box that doubles as a DJ table today, we’re assuming just because it can. The box connects to your phone or computer via Bluetooth and links up to DJ apps like Serato and DJ Pro. All of the actual DJ controls, however, rest on top of the cardboard.

Printed electronics company Novalia created the buttons and sliders. Touch sensors overlaid on the cardboard send the information to react in real time to the user’s own private mixes.

We don’t know who DJ Vectra is, but if this commercial is any indication Pizza Hut chose a way better spokesman than those two times it used Donald Trump as a frontman (once as a “typical New Yorker” and once making an uncomfortable divorce joke with his ex wife Ivana).

The pizza box booth can do pretty much everything a simple DJ table can. It can slow down, cue, sync, mix, and switch between two different tracks. It even scratches. It’s as democratizing as the Google Cardboard is for virtual reality headsets, except it’s meant to be quickly thrown away because no one wants pizza grease on their hands after they are done eating it.

Still, it’s a lesson in corporate un-sustainability. Just because Bluetooth and sensor technology is cheap and ubiquitous now is hardly an excuse to put it in something that is meant to be trashed within an hour of use. Pizza boxes are already cumbersome enough without Pizza Hut trying to turn everyone into that one kid in college who kept all his pizza boxes for an entire semester.

And Pizza Hut probably doesn’t have some recycling robot roaming the streets and breaking down the recyclable components of their technologically advanced containers.

Regardless of the wasteful impact, you can bet that Scott Wiener, the owner of the largest pizza box collection in the world, will keep a DJ table Pizza Hut box for posterity and our waste-filled future.

For a DJ box of your own, follow @PizzaHutUK, where participating restaurants will be announced.