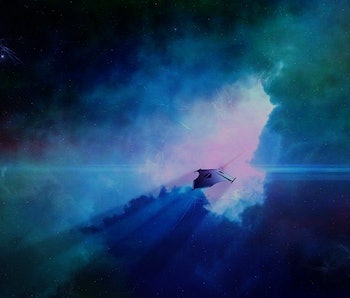 Exactly 39 years ago, an Ohio State University astronomer stumbled upon a strange radio signal emanating from outer space that raised the specter of extraterrestrial intelligence far beyond what scientists had observed before. Called the Wow! signal, the 72-second sequence of strange and inexplicably strong radio waves originating from the constellation Sagittarius became a point of fascination for many scientists — and something of an obsession for a some.

Yet here we are in 2016 — no closer to determining exactly what the Wow! signal is, and whether it’s the sign of some sort of natural interstellar phenomenon, extraterrestrials attempting to communicate with us, or something else entirely.

For the uninitiated, here’s a quick backgrounder to catch you up. Back in the 70s, a group of astronomers led by Jerry Ehman were running a small SETI project using Ohio State’s Big Ear Telescope. At the time, SETI research was almost exclusively limited to scanning the far reaches of the universe for radio signals that would be indicative of intelligent aliens firing off powerful communications here and there. From 1963 to 1973, Big Ear’s purpose was to essentially help in the creation of a map of the night sky. Afterwards, Ehman and his team were able to snag it for full-time SETI investigations.

For years, this was a fruitless search. On August 15, 1977, however, the telescope picked up an insanely intense radio signal — 30 times stronger than normal deep space. It was unlike anything the telescope had ever found before. A few days later, as Ehman was poring through the data, he circled the apex values from the plot of the signal, and wrote “Wow!” Further analysis found the signal seems to have traveled all the way from the northwest part of globular cluster Messier 55 located in Sagittarius, about 17,600 light-years from Earth.

Since then, scientists have never detected a similarly powerful signal. For a long time, the best explanation for what the Wow! signal was (that didn’t have to do with aliens) were that an Earth-borne signal bounced off some space debris and came back to earth — but this was later shown to be highly unlikely.

A better explanation was published recently by a Russian astronomer, who hypothesized the Wow! signal was the product of a strange hydrogen cloud produced by a pair of comets. This is also a hotly debated theory — mostly because Big Ear would have almost surely have detected the same signal again about a minute later.

So where are we nowadays with the Wow! signal? Basically where we’ve always been: with a set of extremely strange data in front of us, and with no real explanation of what it is. To this day, Ehman continues to believe intelligent life from another world is responsible for the signal, while skeptics maintain there is a more natural reason at play which we simply haven’t figure out.

Nevertheless, as more resources pour into space research and we get a better idea at what exactly exists out there in the universe, we’re more and more likely to soon see a real explanation behind the Wow! signal. Aliens or not, it will almost surely “wow” us.

More like this
Culture
6.19.2022 10:30 AM
5 years ago, Ridley Scott made his biggest sci-fi mistake ever
By Alex Welch
Entertainment
6.30.2022 1:00 PM
'Strange New Worlds' writer explains that horrifying 'Alien'-inspired Star Trek canon change
By Ryan Britt
Entertainment
6.22.2022 11:00 AM
20 years ago, Disney's most chaotic sci-fi experiment ever paid off
By Rebecca Long
Share: