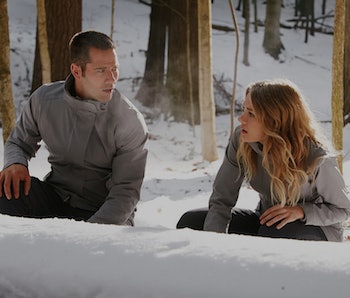 We love Killjoys, and that’s why we have to say something: tonight’s episode raised the fucking bar.

This week proves Killjoys can pull off major tonal shifts in ways that make the world feel big, real, and grounded. That when killer one-liners, razor-sharp dialogue, and that unique Killjoys ability to move at warp speed without leaving us behind come together; it’s a beautiful thing.

Tonight, we got up close and personal with the Black Root and watched Killjoys oscillate between humor, action, tragedy, and an unexpected sweetness. Following D’avin’s encounter with Sabine that sorta left her naked, unconscious, and bleeding green goo, Dav and Johnny bag her up and take her to Lucy. Literally. They put her in a big duffle bag.

Predictably, upon seeing Sabine-in-a-bag, Dutch is less than thrilled. That is until she finds out the team finally has a surprise 89 year-old Level 6 (or, at least, Level 6-adjacent) right where they want them.

What follows is a number of attempts to suss out who Sabine is and what she’s after, which is complicated by the fact that D’av’s “gift” seems to have temporarily cured her of 6-dom. The gang takes her to Turin, but when one of Turin’s people attempts to kill Sabine with a big-ass ice pick-looking stake thing, she springs into action, going all “Betty Behead-y” and uses her restraints to lob off the guy’s head. Turns out he was a Level 6 himself, and the best way to kill a Level 6? Catastrophic brain injury — kinda like a zombie.

With the brain scans from Turin’s headless mole, we find out 6’s are essentially “engineered psychopaths” whose brains are filled with something that torpedoes their ability to feel things and act like decent humans. D’av’s magic 6-proof power chased away the virus for a bit, but scans show it’s coming back and Sabine doesn’t have long before she’s full 6 again.

She and D’av do a little mind-meld action to get a list of undercover 6’s in their midst. From this, they end up together in a kind of dream sequence on Leith where D’avin finds a big mirrored square.

Sabine reveals to D’avin that having feelings for him is the first thing she’s felt in 60 years. She reveals another side of the entire Level 6 scheme. It turns out they’re victims. They didn’t choose this. They’re like the walking dead, and their lives have been pretty much ruined by the “true purpose” of the RAC. Once Sabine goes full 6, Dutch is probably (definitely) going to have to kill her.

As Dutch investigates Sabine’s apartment for a hint as to what she’s really after, she discovers Sabine isn’t just a 6 — she’s Black Root. Immediately after, she’s confronted by one of Sabine’s Black Root cohorts. Luckily, Sabine’s encounter with Turin’s mole clued us into the kill method for regenerating plasma-filled a-holes.

When she gets back to Lucy, she finds that D’av’s let Sabine go, wanting to give her a “fighting chance.” Very noble, but also a big problem because Black Root is next-level dangerous. D’avin’s got a good idea of where she’s headed, though, thanks to the tracker he planted on her: She’s going to the mysterious mirror box on Leith. Johnny’s MIA and his comms are down, so D’av and Dutch head to Leith without him, telling him to “sit tight.”

Elsewhere, Johnny’s following a lead on the woman who helped design the wall around Old Town for Pawter as they continue their secret plot to outsmart the Company. The controls are in Jelco’s office in Spring Hill, so Johnny casually breaks-in, enters, and gets captured, because Jelco’s nothing if not a creepy Company jackass with a penchant for being perpetually one step ahead (except, of course, when it comes to Pawter putting a bomb in his heart).

On Leith, Dutch finds the mirror cube, but Sabine isn’t far behind. The two face off, but in a final moment of clarity, Sabine asks Dutch to kill her. Never known for being weak in the moment of truth, Dutch obliges. Is a bullet to the head actually enough to stop Black Root? Time will tell.

Upon entering the mystery mirror cube, Dutch discovers it’s not a secret Black Root outpost, but a supply cache for her, set up by Khlyen. She likely found it before she was supposed to, though. To make matters more complicated, there’s a brand new red box, which can only mean one thing: Dutch has a kill order.

“Heart-Shaped Box” felt like a masterclass in Killjoys-ology, and that probably has something to do with the fact this episode was written by creator and showrunner Michelle Lovretta. It had a little bit of everything, and it came together in a way that was seamless and intentioned – and, frankly, gave us a hint that Killjoys totally has the potential to keep getting better, weirder, funnier, faster, and more touching than we’ve ever seen.

This episode brought us next-level Dutch and said, “Stakes? I’ll show you stakes.” There hasn’t been an episode yet this season that hasn’t been fun to watch, but this one sticks out as one of the best. We’ve always been able to count on Killjoys to show us a good time and whole lot of awesome every time we tune in. Tonight’s episode proves the best is yet to come.