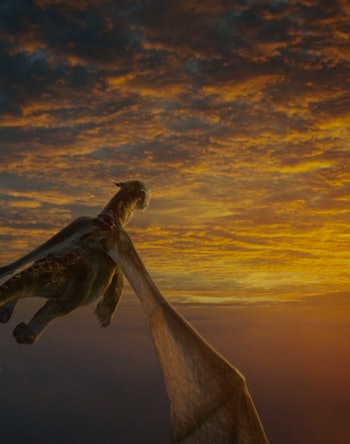 Disney’s remake of Pete’s Dragon hits cinemas this weekend, and with it comes a new take on the mythical creature that has long dominated our movie and TV screens. For over half a century, effects artists have labored to design, build, and animate the majestic beast, and audiences have clamored to witness such a diverse range of characters being brought to life, in so many diverse ways. We’ve rounded up some of the best dragons in movie and TV history and how they were made.

Laying the groundwork for perhaps all future dragon visual effects was revered stop motion animator Ray Harryhausen’s work for the lizard-like Taro in The 7th Voyage of Sinbad. Taro battles a giant cyclops in one of the film’s most iconic scenes. It might seem crude by today’s standards, but Harryhausen had mastered the art of hand-animating his detailed models frame by frame.

The animator also utilized a system he called “Dynamation,” which relied on pre-shot live action footage being projected in the background, in front of which he would animate the models. Another layer of live action would often be in front of this animation, adding extra realism to the scene. Many animators, include several responsible for the dragons discussed here, cite Harryhausen’s work as their inspiration for getting into effects.

Among those animators inspired by Harryhausen is Phil Tippett, well-known for his work on the holochess sequence in Star Wars and the Hoth sequences in The Empire Strikes Back. For Dragonslayer’s Vermithrax character, Tippett, while at Industrial Light & Magic, used stop motion animation techniques but improved upon what he saw as an issue with realistic motion. The technique he devised became known as “Go-Motion,” and brought motion blur into stop motion animation by enabling the puppet to move while each frame of the film was being exposed.

Go-Motion worked by articulating an animation puppet with computer-controlled rods that could move along the X, Y, and Z axes. It was a technology with origins in the motion control camera equipment Tippett had witnessed being used on the first Star Wars film at ILM for the space battles. “These motion control rigs were already there,” Tippett told Inverse, “so we figured out ways of tracking a puppet as a motion control rig and generally just used the forward momentum to get the motion blur of the puppet to move when the camera shutter was open.”

Phil Tippett later had a hand in crafting Draco from Dragonheart, too, but this time in realizing designs and a maquette that ILM would then use to make a digital dragon. Draco, voiced by Sean Connery, would prove to be a game-changer in terms of visual effects. Until then, a CG creature had not commanded so much screen-time, and ILM also developed several technical breakthroughs to make the dragon and his speaking abilities possible.

That tech was a facial animation system called Caricature or CARI, developed by Cary Phillips, which gave animators a very fast way to move Draco’s face model around to form face and mouth shapes that mimicked Connery’s unique mannerisms. It was something that at the time would normally take hours. “Cary had figured out some incredibly fast math that isolated points on the model and could dump all the extra data that wasn’t needed,” explains Rob Coleman, who was the co-supervising character animator at ILM on Dragonheart. “It was this brilliant but simple solution.”

By 2002, computer graphics techniques had advanced even further, culminating in the impressive dragons seen in Reign of Fire. Disney’s in-house visual effects studio, The Secret Lab, was responsible for these fire-breathing creatures, which were voiced by Matthew McConaughey and Christian Bale and set in an alternate world where dragons rule — almost. The Secret Lab relied heavily on nature reference to ground the dragons in the real world, adding bat-like wing and wrist mechanics to their creature and having the fire from its mouth ignite by a mix of two chemicals, rather than something more magical.

Technology-wise, the visual effects team also came up with an advanced system to deal with the dragon’s hard scales. As the scales deform, you don’t really want them to change shape,” Dan DeLeeuw, a co-visual effects supervisor on the film, told Inverse. “So we thought, what if we could grow scales like we can grow hair? Our tech supervisor took a previous dog model we’d made for 102 Dalmatians and gave it scales on its back, and then after that we knew we could grow convincing hard scales for the dragons.”

As soon as audiences found out that Benedict Cumberbatch would be playing Smaug in Peter Jackson’s Hobbit films, a new wave of interest hit the beloved Middle-Earth stories. And not only would the actor lend his voice to the character, his actions, via motion capture, would also be part of the dragon’s final animation. Although that wasn’t strictly the case (the mo-cap was used just as reference), visual effects studio Weta Digital clearly inserted the “essence” of Cumberbatch’s performance into Smaug.

What’s so wondrous about Weta Digital’s Smaug is that he is a combination of so many favorite dragon attributes - scales, reptilian features, fire, and elaborate flying. A large part of his appearance in The Desolation of Smaug, the second film in the Hobbit trilogy, also required him to interact with millions of gold coins and objects — effects simulations care of Weta Digital that embed him into the scenes and re-create what so many readers had only been able to imagine before. And if you liked Smaug, Weta Digital is also responsible for the CG Elliott in Pete’s Dragon.

Over six seasons of HBO’s Game of Thrones, television audiences have watched Daenerys Targaryen’s dragons grow up, especially the largest, Drogon. Thanks to the kind of visual effects that had previously been reserved for feature films, Drogon’s appearance in the show has ranged from close interaction with Daenerys to major battle scenes. Several VFX studios have worked on the character, primarily Pixomondo, but also Rhythm & Hues and BlueBolt.

For example, Derek Spears and his team at Rhythm & Hues took on the stunning arena rescue scene in Season 5, where Drogon saves Daenerys. Here, the CG dragon was expertly combined with some very practical effects solutions such as an on-set flame-thrower. “We had pre-animated some of the shots,” Spears told Inverse, “so that the practical, motion control-driven flame elements could shoot on set, which made the fire more realistic and tied into the environment.”

Meanwhile, Sven Martin from Pixomondo has been working on Drogon over several years of the show, proof of the sometimes unique bond visual effects supervisors can form with their digital creations. “Nearly doubling their size every year, the complexity of Drogon’s rig, the textures and the amount of scales forced us to come up with smart solutions,” he told Inverse. “The amount of textures for example went up by factor ten from 70 to 700 between Season 4 to 5 and one chest scale of the dragon has now the size of a whole Season 2 dragon!”