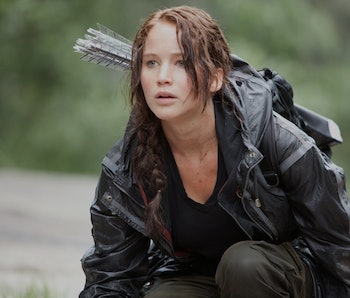 As humans, we love competition. We love seeing people overcome incredible odds to win, to overcome. We relish in the triumph of the human spirit and bask in vicarious glories as if they were our own. That’s why we love the Olympics — and are attracted to way more terrifying competitions.

Sporting events and competitions centered around physical and strategic prowess are great lenses for examining the darker sides of the human condition — an obsession with entertainment, tensions across socioeconomic divides, a “them” and “us” mentality, a ruthless will to survive. Competition driven to the extreme gives us some fodder for the dystopian future of sporting where the stakes are much higher and victory isn’t signified by a medal, but by the fact that you’re still drawing breath. “You win or you die,” isn’t a concept unique to Westeros.

Competition and sporting in science fiction can get pretty #dark, and here are few of the darkest death matches, ranked from least to most crazy violent.

Rollerball isn’t quite as deadly as some of the other matches here, but that’s not saying much. Like roller derby on steroids, the stakes of rollerball are still incredibly high, and there are far-reaching implications and consequences for winners and losers, as they represent cities and the corporations that own them.

Kids selected to train and then represent their districts in a life-or-death free-for-all? Yeah, that feels a bit like “Olympics turned horrific.” In some districts, the representatives have been training their entire lives for the chance to qualify and compete. In others, it’s a death sentence by random selection.

Battle Royale is like The Hunger Games before there were Hunger Games. Originally a novel by Koushun Takami published in 1999, Battle Royale also got the film treatment. Like The Hunger Games, the competitors are kids and it’s a televised fight-to-the-death match. In Battle Royale, though, students are sent to an island and outfitted with collars that explode if they break one of the rules of the game. When there’s only one student remaining, he or she is allowed to leave the island. Worst. School Trip. Ever.

Hailing from the era of Peak Schwarzenegger, The Running Man is the story of near-future television sensation by the same name. Prisoners are given the chance to run for their freedom, but if they fall short, they suffer a brutal, deadly fate. The televised bloodbath is opt-in, unlike Battle Royale and The Hunger Games, but has some of the pageantry characteristic of the latter (and the Olympics).

Things are a little different in Kombatverse, as it’s a one-on-one fight rather than a deadly group match. It’s still a fight to the death, but there’s no complication of alliances or friendships, and the stakes aren’t district pride, but the right of your realm to invade another. So while you’re fighting solo, you’re kind of fighting for everyone a lá provisions in The Hunger Games, but more lethal.

More like this
Entertainment
5.4.2022 10:00 AM
George Lucas almost cut Star Wars’ most important character from A New Hope
By Ryan Britt
Science
5.6.2022 11:30 AM
The best sci-fi thriller on Netflix reveals a provocative spin on time travel
By Tara Yarlagadda
Culture
5.5.2022 9:00 AM
8 incredible sci-fi shows and movies new on Amazon Prime in May 2022
By Bryan Lawver
Related Tags
Share: