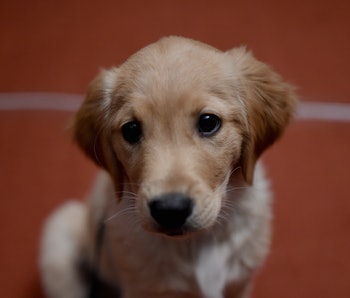 Golden retriever studs are getting a lot less studly. According to research published Tuesday in Scientific Reports, sperm quality declined at a guide dog breeding facility over the course of 26 years. Blame chemicals in the environment.

This could be doggie style’s Silent Spring moment. The research is particularly significant because of an ongoing scientific debate over the cause and magnitude of sperm count and fertility declines in humans over the last 70 years. If a clear link can be shown between environmental contaminants and the less spunky spunk in dogs, the researchers say, it bolsters the position that the same thing might be happening in men.

“The dog may indeed be a sentinel for humans — it shares the same environment, exhibits the same range of diseases, many with the same frequency and responds in a similar way to therapies,” says lead author Richard Lea of the University of Nottingham’s School of Veterinary Medicine in a news release.

The study tested 1,925 sperm samples from 232 golden retrievers, Labrador retrievers, curly coat retrievers, border collies, and German shepherds. All of the samples were tested using the same procedures in the same laboratory over the 26 years, giving the data a robustness not available in many human male fertility studies, the authors write.

They found that sperm motility — their tendency to swim in a straight-ahead march rather than a drunken swagger — declined by 2.5 percent a year for the first decade, and by 1.2 percent per year after that, after dogs with poor fertility were removed from the stud population.

Furthermore, the proportion of male to female puppies born from the studs declined over time, and the incidence of cryptorchidism — failure of the testicle to drop into the scrotum — raised among male pups.

The researchers found chemical contaminants, including DEHP and PCB153, in the sperm itself and also in dog foods, including those marketed for puppies. They contend that these toxic compounds, used in plastics manufacturing and other applications, could be the main source of the fertility declines in dogs, and possibly humans too. Other studies have linked geographical concentrations of these types of chemicals to rates of testicular cancer and male sexual health issues, although the research is still contested.

Humans generally don’t eat puppy chow, but many do rely on heavily processed industrial food consumption. The thing about environmental contaminants, too, is that they’re pretty much everywhere, and nearly impossible to scrub from the environment. Choosing cleaner environments and food sources will help, but on a global scale only preventing the chemicals from leaching out in the first place can reverse the trend. At least your little soldiers and your little buddy’s little soldiers are in it together.