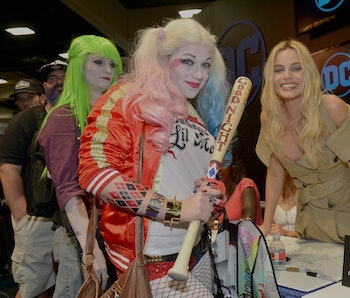 When a small child is crying, nothing else really matters. The shouting and bellowing drown out all other conversations, interrupting everyone else in the room. For a parent, the entire focus is on getting the kid to pipe down, and even put on a smile. Now, if they were in, say, a restaurant, the quickest and easiest path to making the kid happy would be ordering them a big dessert and let ‘em go to town. Long-term, though, it’s an awful play; I’m not a parent, but I assume that the goal is to teach kids that they can’t always get what they want, and also feed ‘em healthy food so they grow up nice and strong.

Guess what? The above was a metaphor! I’m not talking about children — or, well, young children, anyways.

Major film studios face a conundrum: They pin their hopes to comic book heroes — and increasingly obscure ones — to build giant, four-quadrant movie franchises and cash cows; but have to rely on the enthusiasm of very finicky hardcore fans to build up hype for the movies (not to mention pay to see them over and over again). The problem here is that hardcore fans and casual moviegoers have very different desires and expectations, and unfortunately, the fans — the loudest people in the room — are winning the battle for attention and deference. Look no further than this past weekend’s Suicide Squad, and its Warner Bros./DC predecessor, Batman V Superman, to see why.

It makes all the sense in the world for studios to swarm Comic-Con with promotional items, teasers, and full cast panels. They’re taking care of their base, their hype men, their loyal customers. The issue comes when that base — which has grown louder and more entitled over the years — demands so many concessions in the actual movies that they become nothing but bogged down vessels for fan service and visual effects.

Look at Batman V Superman, which skimped on the heavyweight matchup that its title promised, and instead opted to use most of its incomprehensibly long running time to tease future installments of DC movies. Scenes of Batman leaning over his laptop, looking at YouTube footage of The Flash and Aquaman, elicited cheers from fans, but they took the mainstream audience right out of the movie. Ultimately, it felt like a 180-minute trailer.

Suicide Squad, meanwhile, just about drowned in the fan expectations, with reshoots leading to the film forgoing a coherent narrative for a flashy prologue that introduced its anti-hero protagonists. The sequence, which made up about 40 minutes of the film, was stuffed to the gills with little instances of fan service and Easter eggs. From there, the movie indulged in plenty of other oblique references to old comic books that felt out of place and simply confusing for anyone without a wall of graphic novels back home.

The film was lambasted by critics, and in response, director David Ayer and his cast swore up and down that the film was — no kidding — made for the fans.

“The movie is good, the movie has a great heart and the movie is made for the fans,” Ayer told NME. “I think they know that and they see that… Some of the criticism is so over-the-top vitriolic that the fans recognize that there seems to be something else going on. They want the opportunity to see the movie and reign in on the movie and not be dictated to [about] how they should feel about it.”

It begs the question, then, of what do fans actually want? Is it to be pandered to with little references and validation of their geeky passions, or to watch a smart and exciting action film that also connects with their friends and family in the audience? I’m no expert, but I’d venture a guess that it’s the latter; after all, people fell in love with comic books because they enjoyed the adventures they provided, not because they referenced past issues.

Look at the Marvel movies. No one loved the first Iron Man because they referenced old comic book panels, and Avengers built an incredible group dynamic based on characters people had grown to know and love over several years. Guardians of the Galaxy tossed in a few Easter eggs for fans, but the focus was introducing fun, relatable characters; even Groot, the self-conscious tree, was more compelling than anyone in BvS.

Maybe I’m wrong, and fans would rather have their obsessions validated by fleeting winks in movies. But, ultimately, fans’ preferences are actually immaterial, because no matter how much they wind up loving the finished product, there just aren’t enough superhero diehards to make these big, bloated films profitable. It’s estimated that Suicide Squad cost Warners around $325 million, which means it’ll have to make well over $650 million worldwide just to break even. So while it set records at the box office in its opening weekend, its major Friday-to-Saturday fall-of — 40 percent fewer tickets were sold after opening night — suggests that its bad reviews might keep away the casual moviegoer.

Warner Bros. will probably make its money back eventually, thanks to merchandise, digital video, broadcast rights and the like. But instead of setting up long-lasting franchises, their catering to the screaming fans creates instantly forgettable films for the rest of us. The fans will be there, likely no matter what. If WB continues down this path, everyone else is going to bail.

More like this
Culture
6.20.2022 12:00 PM
25 years ago, the worst Batman movie ruined the franchise — and inspired a modern trend
By Dais Johnston
Entertainment
7.3.2022 2:00 PM
How Marcel the Shell invented "never been done before” stop-motion
By Eric Francisco
Entertainment
7.3.2022 11:00 AM
Marvel’s most mysterious Phase 4 trends is setting the MCU up to fail
By Dais Johnston
Related Tags
Share: