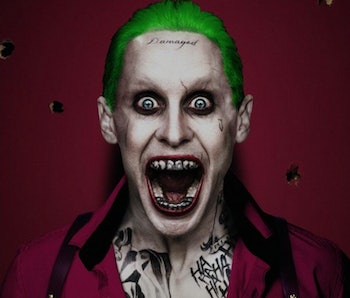 Regardless of what one thinks about Suicide Squad on a critical level, we can all agree that Jared Letos Joker is next-level creepy.

Why is that? Is it just that the guy went full method and embraced his creepiness by eschewing any regard for reasonable and respectful boundaries? Did the guy tap into the darkest parts of the human experience and come out on the other side deeply informed about what lurks in the shadows of crappy person-dom? Is it the creepy-ass green hair?

Nope. A lot of it comes down to his eyebrows, or lack thereof.

Turns out that eyebrows are extremely important when it comes to expressing emotion, identifying faces and people, and interpreting the emotional and nonverbal cues of others. As humans, those things are kind of the cornerstones of our existence and experience, so when we tinker with them, things get weird fast.

Professor Javid Sadr has done a lot of research on eyebrows, examining everything from their role in nonverbal cues to their importance in facial recognition. In an oft-cited study called The Role of Eyebrows in Facial Recognition, Sadr found that while there are centuries worth of research on the role and importance of our eyes in communication and recognition, removing the eyebrows from someone’s face was actually more disruptive to our visual system’s ability to identify someone than removing someone’s actual eyes.

Your eyebrows have a lot to do with who you are. There’s a huge amount of variety in eyebrows, too, so if you were to remove your eyebrows or replace them with someone else’s, your face takes on a totally different appearance as far as our brains are concerned.

“If your eyebrows aren’t there — your particular eyebrows — your face will be really hard to recognize by people who know you,” says Sadr. “The absence of your eyebrows really makes the visual system take a hit in terms of recognizing that person.”

Why is that? Eyebrows don’t seem like one of the make-or-break aspects of our face, do they? For the most part, it seems like they’re just sort of…there. But eyebrows are a key defining border for our faces.

“The eyebrows really define the start of the face,” says Sadr. Without eyebrows, we’re all forehead and then eyeballs. It looks bizarre, and Sadr compares it to a circle without edges. It’s difficult to define and identify.

“It really disrupts the structure of the face,” says Sadr.

Beyond defining the beginning of our faces, eyebrows are key for expressing emotion.

Without those emotional cues, it becomes difficult to understand the emotions that someones displaying and that affects our ability to react to them. In short, we have a hard time understanding and categorizing what we’re seeing and that freaks us out.

That issue of categorization extends beyond emotional cues, though. Tied up in the importance of eyebrows for identification is the key role they play in our ability to categorize faces — masculine, feminine, happy, sad, human, inhuman, etc. To understand the effect that this has on us, it’s helpful to think about our discomfort stemming from an inability to categorize faces in terms of the Uncanny Valley.

The Uncanny Valley refers to a concept pertaining to computer generated images of humans. When we see animated characters or people that we can clearly identify as animated — say a cartoon dinosaur or the humans from The Incredibles — they don’t make us uncomfortable. We understand where they exist in the world. They’re clearly animated and exaggerated and bear no real resemblance to actual humans or dinosaurs.

But as we approach realism, we come to the Uncanny Valley a steep drop-off in our comfort level as we’re confronted with faces that become difficult to categorize. When things become too real without being real enough, they give us the willies. Our brains want to understand what’s happening around us so that we can assess threats and respond appropriately to social situations.

As we extend that idea of categorization and how we’re affected by an inability to categorize someone’s face without eyebrows, it becomes a easier to understand why a lack of eyebrows can freak us out — it’s a little bit like the real-life version of the Uncanny Valley and gets at the same concept.

And Jared Leto’s Joker isn’t the first character to take advantage of this IRL Uncanny Valley for the freak out factor (and, for the record, not the first time hes gone eyebrow-less. See also: Dallas Buyers Club) . Sadr points to Voldemort — one of the most grotesque and disturbing (mostly) human appearances in cinema in recent memory. Sure, there’s a lot of weird stuff going on with Voldemort’s face, but if you give him eyebrows, even the nose becomes a little bit more of a forgivable departure from normal human appearance.

So when you walk out of theaters after seeing Suicide Squad this weekend wondering why Jared Leto’s Joker is so unnerving, it’s not just thanks to some questionable practices in method acting and a seemingly unprecedented ability to channel darkness into a character — it’s his eyebrows.

More like this
Culture
6.29.2022 10:00 AM
6 years ago, Marvel released its most incoherent sequel ever
By Graeme McMillan
Entertainment
6.24.2022 11:15 AM
Behind the scenes at “Herogasm,” The Boys’ most NSFW episode ever
By Aaron Pruner and Jake Kleinman
Entertainment
6.23.2022 4:42 PM
Obi-Wan Kenobi Easter egg gives the show’s best scene a deeper meaning
By Dais Johnston
Related Tags
Share: