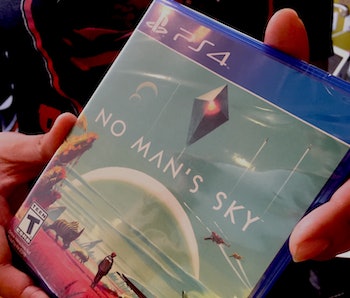 Developer Hello Games is all set to release No Man’s Sky, its highly anticipated space exploration game, this coming Tuesday, August 9. Well, officially, that is. Some retailers have broken street date by selling copies early. We know, because we went out and found one.

Why retailers break street date is complicated – and comes with a variety of possible answers. It depends on the game, the retailer, and how badly people want to play the game. There’s no definitive answer to the question, unfortunately.

For No Man’s Sky, it seems to be a confluence of factors. No early reviews for an extremely hyped game fuels feverish anticipation. The early leak where footage of a single copy began to circulate only made all of that worse. Now the weekend sits between ravenous fans and the truth; it’s the perfect digital storm.

The exact reason why specific retailers are going ahead with it may never be known. After learning that retail copies were out in the wild, we made a few calls to a couple retailers that were suspected of being the guilty party to try and confirm. The phone conversation that ultimately led to our purchase of a retail copy went as follows:

Them: “Uh, no, but if you wanted to come in and check out our selection, it would be very worth your while.”

Is it possible to nod and wink verbally without saying the words “nod” or “wink” out loud? Because that’s what the person on the other end of the line did.

When we arrived to purchase our early copy, the actual process was simple. We asked, they provided, and we paid. When we followed up with a question about how they were selling them early and not on the release date, they only said one word in response.

More like this
Gaming
November 21, 2022
The best desert-island RPG ever is now on PS5
By Hayes Madsen
Gaming
November 15, 2022
9 years ago, one console reset the balance of power in the video game industry
By Joseph Yaden
Gaming
23 hours ago
16 best Electric-type Pokémon in Scarlet and Violet, ranked
By Robin Bea
Related Tags
Share: