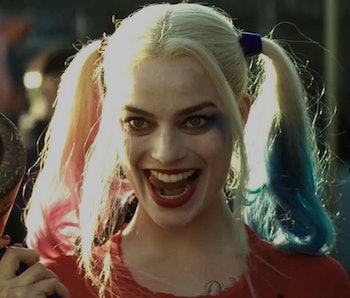 The two things you might be thinking after watching Suicide Squad are this: “WTF was that?” and “WTF is wrong with Harley Quinn?”

The movie’s treatment of Margot Robbie’s character, Harley Quinn, indicates she’s a troubled character, to say the least. Quinn comes across as a psychotic sociopath who enjoys hurting people. Her actual condition, however, isn’t addressed and remains a mystery.

But there actually is a psychological condition that could explain a lot of Harley Quinn’s whacked-out self. Hybristophilia, also known as “Bonnie and Clyde Syndrome”, comes down to one key psychological quirk: A person finds their partner intensely attractive when said partner does bad things. In Harley Quinn’s case, the partner in question is the Joker, who abuses her to various degrees depending on the particular iteration of the DC comic. In Suicide Squad, the Joker kills for funsies and/or to “save” Harley Quinn from whatever she needs saving from, leading Quinn to be oddly turned on by the sick dude.

But don’t confuse hybristophilia with co-dependency or Stockholm Syndrome. It’s a distinct psychopathology, largely due to the emotional sexual roots of the condition. Hybristophilia is literally getting off on your partner’s crimes, so it’s classified as a paraphilia, or sexual condition, but it’s also distinct from sexual masochism and/or BSDM. It’s not getting turned on by your partner hurting you so much as it’s getting a high from your partner behaving badly — a much more prominent theme in the movie than the Joker’s mistreatment of Harley Quinn specifically. Suicide Squad doesn’t spend a ton of time on the sexual aspect of Harley Quinn’s relationship with the Joker, but the nature of their mutual obsession certainly leaves hybristophilia open as a partial explanation for why she finds such a man attractive and fascinating.