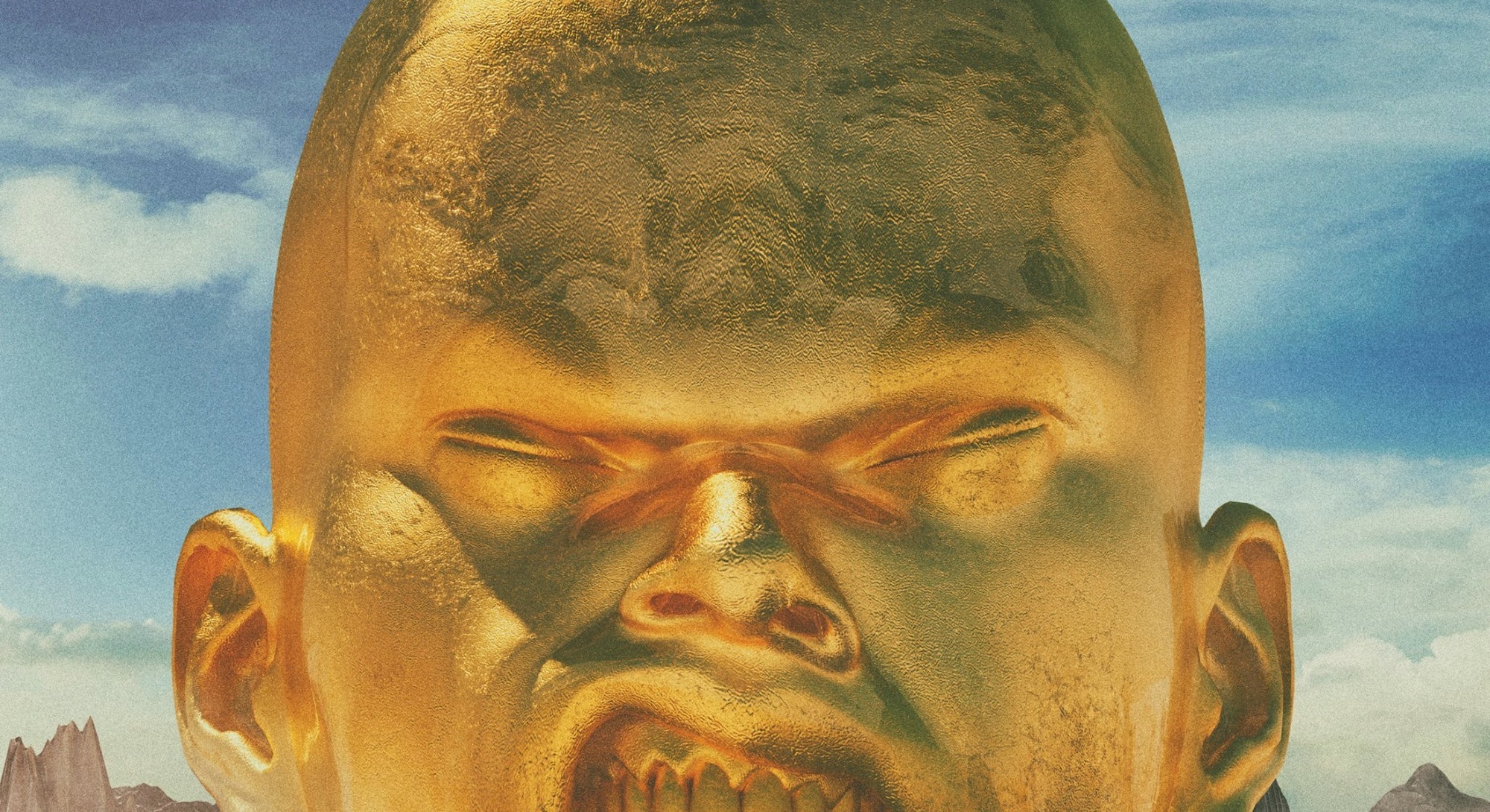 Mike “beeple” Winkelmann has been making an artwork a day for just about a decade. Three-thousand three-hundred and eighty-seven days straight (and counting). He seems to operate in another dimension: each creation is an astounding, beautiful vision of science-fiction. He can make the unnatural look natural, the artificial feel real, the foreign seem familiar. Most often his pieces are renderings — images — but he’s adept at crafting otherworldly short films as well.

He’s long been revered online for these phenomenal creations, and several years ago, he made a music video for composer Flying Lotus. Since then, he’s been on FlyLo’s label, Brainfeeder. In July, he provided visuals for the Democratic National Convention.

Winkelmann lives in a small town in Wisconsin an hour north of Milwaukee. He’s 35 years old, a father of two, and more dedicated to his craft than a flower is to sunlight. He’s the kind of artist that makes other artists give up.

With that track record, you’d expect him to be satisfied. Maybe even proud.

Inverse caught up with Winkelmann to talk about his inhuman motivation, Brainfeeder, the DNC, augmented and virtual reality, and his artistic process.

You’ve been making an artwork a day, give or take a few, for just over nine straight years. What keeps you going?

Honestly, wanting to get better is the biggest underlying thing. Skill-wise, I’m still nowhere near where I’d like to be.

The momentum of the project keeps me going. I’m not going to just not do it today just because I’m feeling lazy. Once you have a good momentum going, it keeps up. I’ve seen a huge amount of growth from the process — so that’s definitely helped me to stay motivated as well.

Where do you most often find yourself when you need ideas?

If anything, it’s just gotten to a point where the problem is almost too many sources of inspiration. You go to Pinterest, or Behance, or Instagram — wherever — and it’s just this flood of work that’s all so awesome and so inspiring that it’s almost like paralyzing. The issue, for me, is more whittling down and trying to focus. Just getting lost in this stream of… internet.

Do you have a go-to method for, as you say, whittling down the infinite —

The infinite black mass of the internet? Not really. I wish I had a better method, and I wish I had some great answer, but no: It’s something that I struggle with on a daily basis. There are so many interesting things going on, in so many different spaces. You just wish you had more time in the day.

How’d you get involved with Flying Lotus, and what’s it like to work for Brainfeeder?

He just emailed me. I think he was just like, ‘Oh, do you wanna work on a music video for me?’ And I was like, ‘Oh, sweet. Definitely.’

At the time, I had heard some of his music, but I didn’t know it was him. I was actually listening to very similar music, but it was all through Pandora. I didn’t realize that a lot of it was actually his stuff.

Everybody who I’ve talked to and worked with through Brainfeeder has been super cool and very like-minded in terms of projects — open to doing weird stuff, and having fun with it.

You provided visuals for the Democratic National Convention.

The DNC hired a political consulting firm that hired an event firm to put on the entire event that hired Possible to do visuals for the event. And Possible hired me. That’s how far removed I was from, like, ‘Hey Hil! You need some visuals?’ Like, no. Not even close to that.

What’d you wind up doing?

Bits and pieces of things. A lot of the visuals for the performances — I ended up doing those. I don’t know if you saw that glass break thing?

There was this big thing where Hillary literally broke through this glass ceiling, and then they cut to a live feed of her. I did that piece of it. It wasn’t my concept, and it wasn’t my design, but I was the one who physically made that piece.

Everything that we did needed to be super, super vetted, through multiple layers, to make sure there was nothing that the Republicans could pick apart. I’ve been following the race pretty close, so for me in particular it was pretty interesting to see the behind-the-scenes.

Yeah, kind of. It was interesting working on it: At times, it was like, ‘Man, it seems like the client is being really picky with this.’ And then the client would say something like, ‘Well, I don’t know what the president’s going to think as he’s sitting up in his box, looking at this.’ And then it was like, whoa, okay, yeah — bring it back. This is a little more high-stakes than the normal, like, ‘Here’s my robot bullshit Everydays’ or whatever. Like, this is real stuff.

Is it fair to say that you haven’t shied away from political commentary in your art? If so, why is that?

I don’t think I’ve made too many of them overtly political. But it’s not something that I would necessarily shy away from, I guess. I obviously have opinions. I guess I would like to make something that’s a little more in the middle, and that makes both sides think. There are plenty of people who are providing answers, or who think they’re providing answers, on the internet, and maybe not enough people stopping to ask questions.

I would say that your short film involving surveillance, Transparent Machines, did remarkably well.

It’s tough, because I think a lot of people maybe took it the wrong way. I mean, how did you take it?

It just left me thinking about privacy in general.

Which is funny, because now it’s sort of like that’s gone away. Everybody’s kinda like, ‘Well, whatever — it is what it is.’ You saw it a little bit with that Pokémon Go thing. ‘Oh, they’re collecting all this data’ — then ‘Meh, whatever.’

Magic Leap recently let you try on one of its headsets. What can you say about that experience?

Legally? Probably nothing. I feel bad, being like ‘I can’t tell you’ about all this stuff. I signed very lengthy documents definitely saying I cannot. I can tell you it was cool, and I think it’s amazing technology. But beyond that, I honestly don’t think I can tell you anything about it. They’re so, so secretive about what they’re working on.

Some of these teaser things… Like that video they posted, the soundbites. Without a context, it just gives people so little.

Do you think AR and VR will be revolutionary mediums for art?

I think they’ll be revolutionary mediums for everything. In the next 20, 30 years, absolutely everybody will be wearing those headsets all the time, just like they carry their cell phones. They’ll be wearing a headset 100 percent of the time, and it will be taken for granted, and people will be talking to imaginary people, and have imaginary chatbot friends. They’ll see all this shit.

This Pokémon Go thing was the tiniest tip of the iceberg.

And that’s just one tiny use case. The use cases for art, entertainment, productivity — everything — are just astronomical. So yeah: I firmly believe that, as dominant as smartphones have been, that will be even more dominant in terms of a transformative technology.

Do you find that more frightening or exciting?

When you show somebody VR for the first time, they’re in it for 15 minutes, 20 minutes, and then they take the headset off. And it’s like, ‘Uwhhhh! Whooaaaa. Fuuuuck! I’m still here!’ You can just see it on their face — it’s like, you were not here.

We don’t have any idea how these technologies are going to screw with our minds. I’m sure there will be some negatives. Overall, I think, they’ll be net-positive things: They’ll make people more productive, and bring people together in new and exciting ways.

Do you always start your art from scratch?

The tools have evolved and my interests have changed. But I don’t ever start with a half-started project from yesterday or the day before: It’s always a quote-unquote blank canvas.

Each one is probably around two to three hours. It really depends on how much time I have that day. If I don’t have that much time, then it’ll be an hour.

A lot of them are cool enough that I wouldn’t have been altogether surprised if you had said six hours, ten hours.

Sometimes they are. It’s hard for me to say, because I don’t just sit down and do it start to finish. Like today, I already started. I started modeling this, I don’t know, this caterpillar-type thing. Honestly, I don’t even know how much time I spent on that, because even that was fragmented between emails and phone calls and other bullshit. So, maybe I’ve got a half hour on it now, I don’t know. I’ll do a little bit more after this, then I’ll finish it up tonight.

Many forward-looking artists, no matter their medium are dissatisfied with the present, and so are kind of escaping the present with their artwork. Would that apply to you?

It’s tough — I don’t know that I would necessarily say ‘dissatisfied,’ although maybe that’s a good word. I am always kind of like, ‘Oh man, when this thing comes out a year from now…’ or, ‘Wait ‘til they have better resolution on these VR headsets…’ There’s always something.

I wish I could just be a little more satisfied with what we have now. And to a degree, I am. There are little times where I’m able to step back and look at my smartphone and just be amazed at how straight-up magic it is compared to 100 years ago. But there are more times than that where I’m like, ‘Oh man — six months from now, when blah blah blah comes out, it’s gonna be so sweet!’

How long until your kids start making art?

In a lot of ways, it’s very much a journal of your life. Just documenting things, here and there.