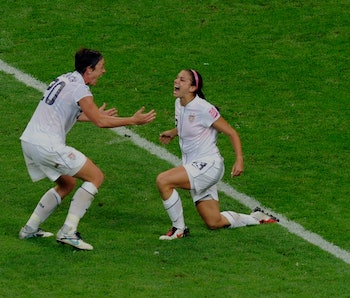 So much for gender stereotypes of men being aggressive and women being forgiving types: Research published Thursday in Current Biology found that men are more likely to exchange conciliatory touches beyond the congratulatory handshake after a match. It’s unclear why men are apparently friendlier than women post-match, but if anything, this study shows that it’s about time we re-examined our assumptions about competitive attitudes based on gender roles.

Joyce Benenson, a psychologist from Emmanuel College, and Richard Wrangham, a biological anthropologist from Harvard University, examined videos of interactions after professional tennis, table tennis, badminton, and boxing matches. From the 140 matches across these sports, men were more likely to have additional physical interaction, and male interactions were longer (between 100 to 1,000 milliseconds).

The study doesn’t provide analysis of how much more likely this contact is across sports, and it doesn’t examine variables outside of making sure the matches were unique within the data set. And some of the conclusions the researchers draw in the paper are questionable, at best: The idea that men are better at reconciling after conflict with same-sex peers, making them more cooperative in government, is particularly eyebrow-raising.

Psychological studies that include gender roles in their analyses find that societal pressures about gender change how men and women behave. And when you look at meta-analysis of gendered studies, researchers find that men and women are really not that different. Gendered expectations are detrimental to both sexes, so it’s nice that male and female athletes overturn our assumptions about gender after competitions.

Until Benenson and Wrangham look into the psychological elements behind this effect, making connections between friendly contact after sparring and collaboration between same-sex individuals is premature. And hey, there’s a cool role reversal at work: In sports, women are less friendly after competition than men. Bring it.

More like this
Mind and Body
Jan. 16, 2023
Research confirms a fact about the clitoris the Ancient Greeks understood
By The Conversation and Helen King
Mind and Body
9 hours ago
Does the Best Workout Exist? Exercise Scientists All Agree on One Thing
By Katie MacBride
Innovation
Jan. 21, 2023
The 6 best running headphones for small ears
By Megan Gray
LEARN SOMETHING NEW EVERY DAY.
Related Tags
Share: